Home Guides How To Get Lucifer In Persona 5 Strikers

Even getting the chance to fuse this Persona will require quite a bit of effort on your part, however, as you will have to complete plenty of post-game content. And even then, you may have to do a little bit of grinding to get all the resources needed to create this powerful Persona.

Here’s how to get Lucifer in the shortest amount of time possible.

How To Get Luficer In Persona 5 Strikers

Before you are even able to attempt the Lucifer fusion in the Velvet Room, you will have to play the game for quite a bit, as not only you have to reach the Tree of Knowledge Jail, but also defeat the final boss and complete the main story.

Once this is done, you will have to complete all of the game’s requests, including those that open up after you have completed the story. This means that you will also have to take down the Reaper, the most powerful enemy in the entire game.

After you have complete all the requests, head over to the Velvet Room and watch the cutscene featuring Lavenza. At this point, you are finally able to fuse Lucifer, but only in the New Game + mode.

How To Fuse Lucifer

Being the most powerful Persona in the whole game, it’s not surprising that you will need multiple high-level Persona to use in the Fusion process.

The first Persona you need is Black Frost, which can be fused by using a level 45 Jack O’Lantern, a level 45 Jack Frost, and a level 65 King Frost. You also need the Giant Snow Crystal obtained by completing the Make Way for the Frozen King quest.

The second Persona you need to fuse Lucifer is Yoshitsune, the most powerful physical Persona in the game. To fuse this Persona, you need a level 70 Siegfried, a level 50 Arahabaki, a level 50 Okuninushi, and a level 60 Yatagarasu. Getting this Persona to the needed level can lead to a bit of grinding.

The third Persona you need to get Lucifer is Metatron. To fuse this Persona, you need to complete the Angel of Contracts Descends request as well as a level 60 Archangel, a level 60 Principality, a level 65 Trumpeter, and a level 65 Dominion.

Alice is the fourth Persona you need to fuse Lucifer. This Persona can be fused with a level 65 Nebiros, a level 65 Bugs, a level 65 Dominion, which you also need to create Metatron, and a level 65 Lilith.

Mara is the fifth and final Persona you need to fuse Lucifer. This monster coming right out of your worst nightmares is easy to fuse if you have obtained Yoshistune and Alice already, as you can use them in the fusion. Alternatively, you can use a level 70 Abaddon, a level 70 Cerberus, and a level 70 Kali.

After you have fused all the above Personas, you have everything you need to get Luficer. Please note that it is a level 90 Persona, so you will need to be at a very high level to create it. 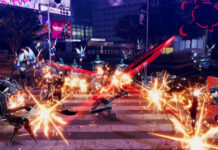 How To Get The Best Armor in Persona 5 Strikers