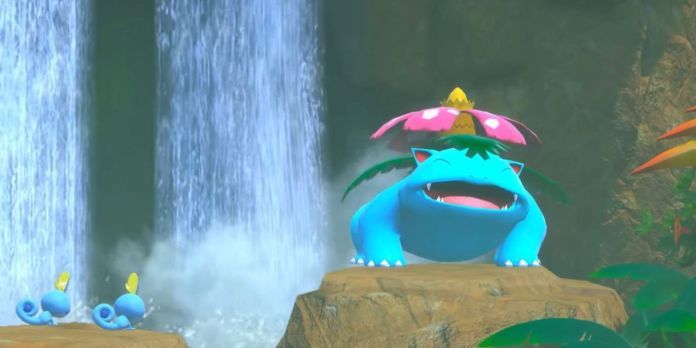 Any self-respecting video game worthy of its name should be chockfull of secrets to discover, and in this regard, New Pokémon Snap definitely does not disappointing, featuring tons of optional content only waiting to be unlocked by all hardcore completionists out there. Even if you are not one, however, you may still want to uncover some of the game’s secrets, which include additional areas found in most of the game’s courses.

Among these optional areas that are seemingly locked off is the area behind the waterfall in Founja Jungle. When you explore the area for the first time, you will notice a Pokémon blocking your way, but it is possible to get it to move aside so that you can find out what is located behind the waterfall.

Here’s how to get behind the waterfall in Founja Jungle.

How To Get Behind The Waterfall In New Pokémon Snap

As already mentioned, the first time you explore Founja Jungle, you will find a Liepard blocking your access to the waterfall. The only way to get it to move is by using the yellow Illumina Orbs that are unlocked after playing the night variant of the stage and take pictures of the crystabloom.

Once you do, play through the day course again, throw the yellow Illumina Orb at the Liepard and it should wake up, moving out of your way. Scan the area behind the waterfall to reveal the secret path.

In case the Liepard is not interesting in the Illumina Orb, you may be dealing with a glitch that has yet to be fixed. Using the camera’s Melody Mode before throwing the Illumina Orb seems to do the trick, but your mileage may vary, as this seems like a very inconsistent glitch with no clear fix as of now.

Accessing the area behind the waterfall in the night variant of the stage is a little more complex. Instead of throwing an Illumina Orb at the Liepard, you must make it move out of the way by making it chase a nearby Pikipek. To do so, you must get to the area where the Liepard lies, ready your camera, get both the Liepard and the Pikipek in the shot, and use the Melody function, which is unlocked by reaching Research Level 2 in both day and night Fouja Jungle. Once the function is activated, the Pikipek will fly away and the Liepard will follow it, opening up your way. Scan the path, and you will be good to go!

How To Get Behind The Waterfall In New Pokémon Snap