Home Game Guides How to Get Angry Birds DLC in Minecraft 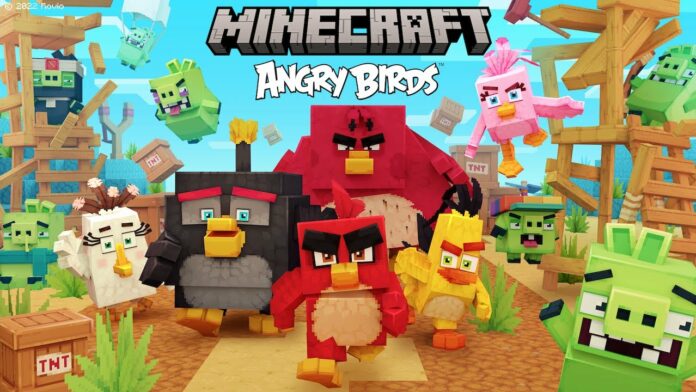 The more popular a live service game is, the more you should expect it to feature crossover events and content that bring worlds and characters that couldn’t be more different together. This, unsurprisingly, has happened multiple times in Minecraft, and it seems like this won’t stop happening anytime soon, considering how the sandbox game by Mojang continues to be among the most popular video games still played today.

The latest crossover content has finally landed in Minecraft, bringing characters from another extremely popular mobile franchise, Angry Birds. Here’s how you can get the new DLC and what exactly is included in it.

How to Get Angry Birds DLC in Minecraft

The Minecraft Angry Birds DLC introduces content inspired by the popular series by Rovio, further expanding the Minecraft experience with new and exciting stuff to do. The new DLC can be purchased from the Minecraft marketplace on your platform of choice for 1340 Minecoins, and once you have purchased it, you will be able to download it and access the new content.

Included in the Minecraft Angry Birds DLC is a new adventure map that comes with features inspired by the series as well as characters that have appeared in it, such as the bird Red and his friends, and a horde of evil piggies that are, as usual, up to no good. Every character comes with some unique skills, so the experience doesn’t get stale after a short while.

RELATED: How to Tame a Creeper in Minecraft

In case you want to see for yourself what is included in the Minecraft Angry Birds DLC pack, you can take a look at the trailer below to see some tower toppling action and more.

Minecraft is now available on every gaming platform on the market, including iOS, Android, Nintendo Switch, and Steam Deck. It is one of the best gaming experiences that can be had nowadays, and with plenty of crossover content having been released through the years, you can expect to see content from your favorite series in this huge sandbox title.

How to Get Angry Birds DLC in Minecraft