Home Guides How to Get and Use the Flamethrower in Terraria 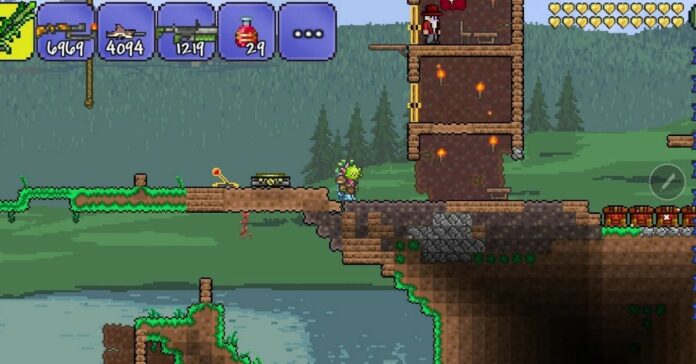 With the release of version 1.1, a flamethrower has appeared in Terraria. This custom ranged rifle deals flame damage and is extremely effective against weak foes. In this guide, you will learn about the stats of the flamethrower in Terraria, as well as how to craft this weapon.

Flamethrower Description And Stats in Terraria

The flamethrower is a powerful weapon. It deals 55 damage per second, while the average shot speed is about 30. This gun is useful in fights with any opponents, and especially against Destroyer. The flamethrower hits several sectors at once, which helps in the fight against this boss.

The gun uses gel as ammunition. For one bullet, the weapon shoots 5 jets of fire. You can create a Gel Factory to constantly replenish your ammo. To do this, you need slug statues.

RELATED: Terraria: What is For The Worthy Mode, and How Do You Activate It?

The flamethrower in Terraria also has drawbacks. This weapon periodically imposes the On Fire debuff on the player and friendly characters, which makes you or them lose up to 4 health units per second. To get rid of the effect, go into the water. And the Obsidian Skin potion also helps neutralize the debuff.

How to Get a Flamethrower in Terraria

Crafting requires a Mithril or Orichalcum Anvil. And you also need to get the following components:

After collecting all the necessary parts, go to the anvil and create an item.