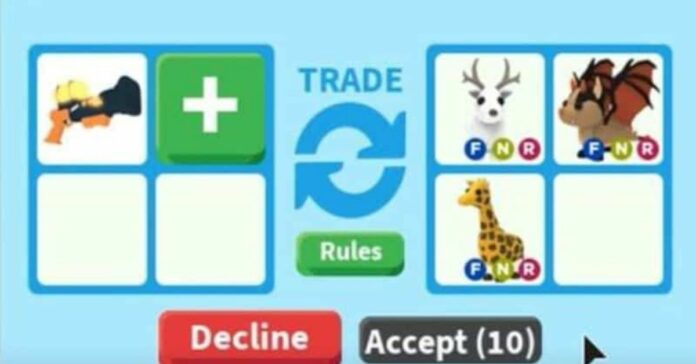 In recent years, in one of the most popular Roblox games, Adopt Me, not only pets but also different types of weapons have been actively appearing. Some guns can be found on the map thanks to high-profile events, while other developers upload them on their own initiative.

So the Candy Cannon item has become one of the most desired among gamers. But the trouble is that today getting a candy gun is not as easy as we would like. The Candy Cannon is a rare item that players first saw during the Halloween 2018 event. Back then, candy-shooting weapons were sold for 2,000 robux. Despite the high cost, many guys literally fought for a limited item, loading the servers with their excessive activity.

After the end of the event, Candy Cannon disappeared from the local online store, so it is impossible to buy it in the public domain. Fortunately, Adopt Me has a well-developed secondary market, where there is sure to be a user who is ready to part with the gun.

RELATED: How to Get Diamond Eggs in Adopt Me – Best Ways

How Does Candy Cannon Work?

The Candy Cannon fires an unlimited amount of candy. Previously, these were lollipops that players picked up to feed their pets. Now it’s just candy. They can also be offered to your animals.

Moreover, this attribute allows you to increase the speed of the character at the moment when the user is on the server. After leaving the game, this indicator is reset.

At the moment, the Candy Cannon is the most expensive item that has ever appeared in Adopt Me. Its price and rarity force the inhabitants of the game to change the rarest pets in order to get such a little thing.