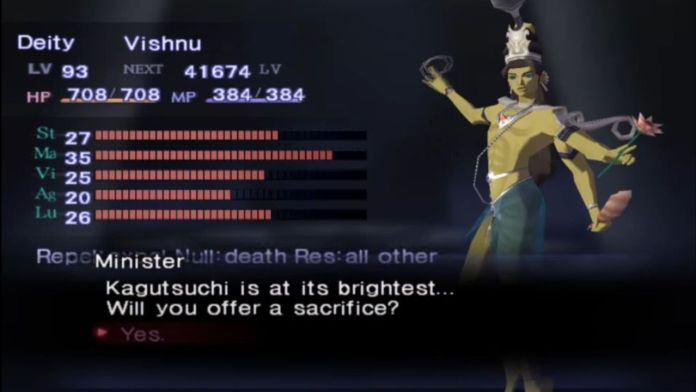 In Shin Megami Tensei III Nocturne HD Remaster, not all demons are created the same. While many of them can be made viable for the vast majority of the game, thanks to the unique Demon Fusion mechanics that let you customize their skillset, there are a few other demons that are way above everyone else, in terms of power and skills. These very powerful demons can only be obtained by fusing some very high-level creatures, but the effort of leveling them up to get access to ultimate demons is well worth it, especially if you’re aiming to complete optional content like the Labyrinth of Amala, one of the most challenging dungeons in the game.

Here’s how to fuse Vishnu, one of the most powerful demons in Shin Megami Tensei III Nocturne HD Remaster.

Vishnu is the ultimate Deity demon, and, as such, comes at a very high base level. To fuse Vishnu, you will need two demons whose fusion results in a Deity demon, and their levels need to be high enough that the sum of their levels divided by two is 93 or higher. Fusing Shiva and Throne will result in a very powerful Vishnu, as the demon can inherit some very powerful skills like Victory Cry.

With Magic being the highest stat, Vishnu learns a good variety of magic skills, but it also learns the extremely good Hades Blast which, with its high critical rate, somewhat makes up for the lower Strength stat.