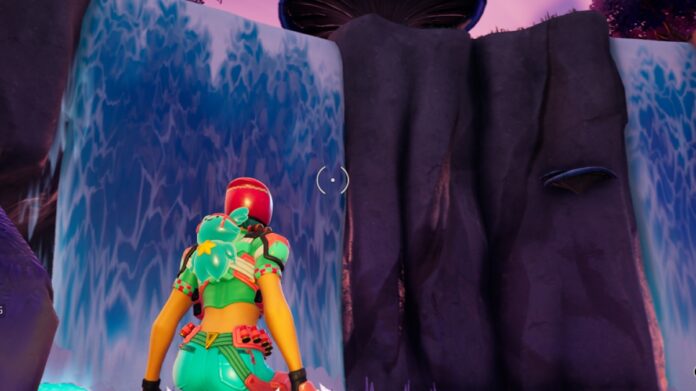 Players in Fortnite have discovered a secret room in Chapter 3 Season 3. Most folk, when they see a waterfall, think ‘wouldn’t it be great if there was a secret lair behind there?’. Well, Epic Games have also had that thought and have hidden one in this new map. Find out more below!

How to Get into the Secret Waterfall Room in Fortnite

The area behind the waterfall was discovered when players were harvesting rock, and found a suspicious pile of rocks that seemed to have trillions of HP. Most assumed that it must be hiding something behind it and that the community should set about trying to collectively destroy the pile and find out who or what is there.

Other smart players have found a better way of getting into this secret room. The first thing to do is land initially at a Gas Station nearby, or at Drill Hill. Here you should be able to find a Cow Catcher vehicle mod, then find a vehicle to attach it to. Cow Catchers can be found in the same places as in the previous season.

Next drive to the waterfall– the best way to approach the secret room is from the back through the entrance where all the geysers are at Peril Pass.

Once you are inside you can ram the pile of rocks with the cow-catcher-modded vehicle, and it destroys it instantly, revealing what is inside. If you do not want to know what is behind the pile- do not scroll any further!

Related: Where to Find Cow Catchers in Fortnite

Behind the pile of rocks are three NPCs, a few chests, and a bunch of rocks to mine! We discovered them when the storm was moving in so we stayed and rocked out with them.

It may take a few attempts to find both the cow catcher and the vehicle, and then drive to the place without getting killed, but it is worth it! Good luck.