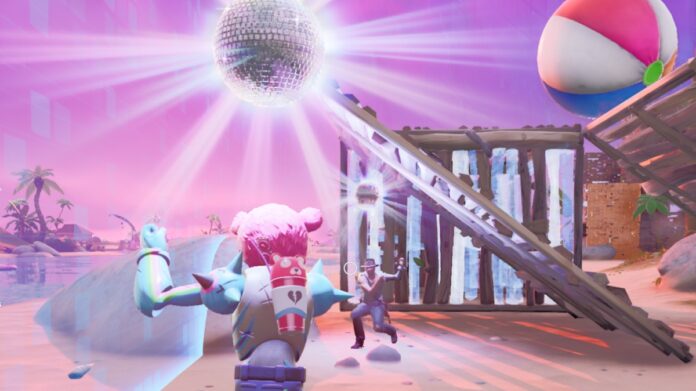 The Boogie Bomb was first introduced to Fortnite during Season 2, all the way back when Tilted Towers was first added as a location! This OG utility item has been vaulted and unvaulted over the years but it remains as popular with players as ever whenever it is brought back to the game. The Boogie Bomb is a throwable item that makes players dance when they’re hit with it or are in range of it landing. Find out below how to find and use the Boogie Bomb in Fortnite.

Where to Find and How to Use the Boogie Bomb

The Boogie Bomb keeps making appearances over the years and gains some mixed reactions. Many players love it, especially those who have been playing since it was first brought into Fortnite back in 2017. Some players, however, dread its return as it can seriously interrupt whatever clutch move you are about to make!

The Boogie Bomb is used by aiming and throwing it at the enemy, an NPC, or even your team mate as a prank. As it lands it does not do any damage but instead sends out a disco ball and makes anyone in the radius dance some funky moves. During the 5 seconds the player is dancing they cannot run, crouch, build or shoot. If the player is in a vehicle, they are forced to jump out and dance.

Related: How to Use a Port-a-Fort in Fortnite

If you throw the Boogie Bomb to a player pretty close to you, you too can be forced to dance, so be careful! While the two of you are dancing another player could come along and attack you.

The Boogie Bomb can be found as Floor Loot, in regular and Rare Chests, and in Supply Drops. It cannot not be fished out of a fishing hole. Players can then carry the Boogie Bomb in stacks of 10!

Related: Where to Find a Zero Point Fish in Fortnite

That is everything you need to know about the Boogie Bomb in Fortnite. Let us know your thoughts- are you happy when you see the bomb back in the game?

How to Find and Use the Boogie Bomb in Fortnite