Home Game Guides How to Find and Use a Pirate Cannon in Fortnite Chapter 3... 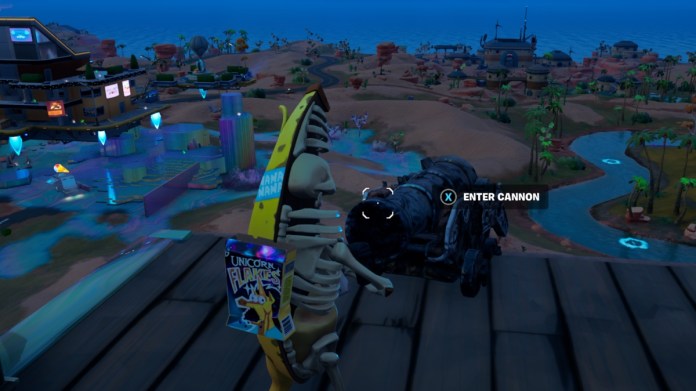 The Pirate Cannon returned from the vaults with the appearance of the Pirate Ship, Driftwood. This could first be found at the Lagoon, but in Chapter 3 Season 4 is now found floating over a desert area near Flutter Barn. Blackheart is still aboard his ship, although looking older with a big white beard, offering Chrome Splash and a Prime Shotgun for sale.

Players can find Pirate Cannons aboard this ship at the front and rear. When they were first unvaulted, players were able to move and steer the cannons. This meant being able to take them across the map, if they so desired, and firing cannon balls at opponents. Unfortunately Epic had to stop this ability as players had discovered an exploit that made anyone steering the cannon invisible to others!

Related: How to Find Supply Llamas in Fortnite Chapter 3 Season 4

The pirate cannons can now only be used in place on the ship. Players can either fire the cannon balls or enter the cannon, aim, and fire theirselves. When being fired through the air, there is no way to steer yourself in any direction so be ready to land where the cannon shoots you!

That is all you need to know about the return of Pirate Cannons in Fortnite Chapter 3 Season 4. Next up, why not find out how to communicate with a hired character in Fortnite? Good luck!