Home Guides How to Find and Catch a Tarantula in Animal Crossing: New Horizons 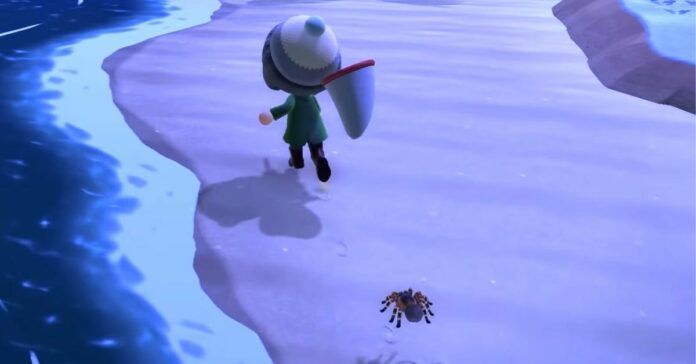 The tarantula is one of the most valuable insects you can find in Animal Crossing: New Horizons. They are so rare that you can sell them for a high price. In this guide, we will show you how to catch these spiders and how to get to Tarantula Island.

How to Find and Catch a Tarantula in Animal Crossing: New Horizons

Tarantulas are rare insects that can be found in the game from October to April from 7:00 pm to 4:00 am. But even then they rarely appear.

When you approach the tarantula, the insect will look at you and raise its legs. If you get close at this moment, the tarantula will attack you. You can catch it during the attack. But if you don’t do it correctly, you will get bitten and lay unconscious while the spider will flee.

A correct spider hunt is a slow approach with the net raised (hold the A button). When the spider lifts its legs, stop and wait. After a while, it will return to its normal position, allowing you to come a little closer. Repeat this process as many times as possible until you are close enough to catch the tarantula in Animal Crossing: New Horizons.

RELATED: How to Use a Smartphone and Inventory in Animal Crossing: New Horizons?

Tarantulas are so rare mainly because they have a very high selling price. In the store, you can sell them for 8,000 Bells. This makes them one of the most valuable animals in the game.

Although you rarely see a tarantula during casual games, there is a way to increase your chances of success.

What Is Tarantula Island and How to Get There?

Tarantula Island is nothing more than the unofficial name for one of the Mysterious Island variants (the random islands you visit for Nook Miles tickets).

Visiting an island like this is one of the best ways to make money in Animal Crossing: New Horizons. You can get around 200,000 bells for selling tarantulas after you make one trip to that place. The mysterious island you visit is randomly selected.

To get to Tarantula Island, you need to go there at night. However, even then this is not guaranteed and depends on luck. Just keep buying Nook Miles tickets until you succeed.

This is everything you should know about Tarantulas in Animal Crossing: New Horizons, how to catch and sell them. We also have a guide on a ladder in this game.