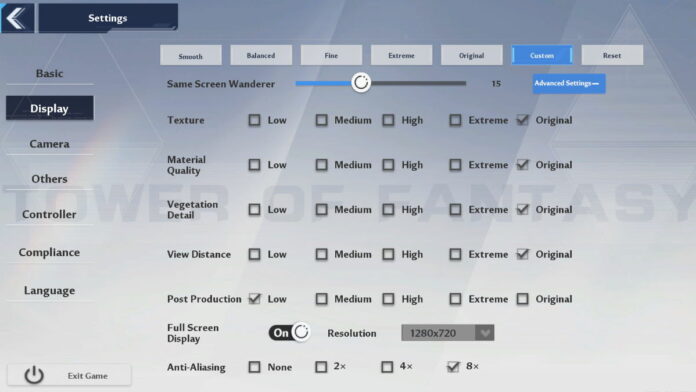 There’s no questioning that Tower of Fantasy is easily one of the best looking games out on mobile right now, right up there alongside Genshin Impact. The game has a lot of graphical settings that you can customize, though players are confused on how to lessen the motion blur effect in the game. Today, we’ll show you how to disable motion blur in Tower of Fantasy!

If you’re like us and first tried playing Tower of Fantasy using the PC client, you may have noticed that it has quite an impressive array of graphical settings. You can tweak individual settings, frame rate, and more.

We’re somewhat prone to dizzying motion blur effects, so we wanted a way to disable the excessive amount of motion blur Tower of Fantasy has. At first glance, there doesn’t seem to be any options for it.

We guessed that post-production might have included motion blur in the advanced settings, so we set it to low. This helped a tiny bit, but the motion blur was still very much noticeable. As of writing, there doesn’t seem to be an official way to disable the motion blur entirely.

Related | How to Switch to Controller in Tower of Fantasy

Thankfully, the community was quick on the draw. Thanks to Reddit user maharahji, we now have a working way to disable the motion blur. Note that this workaround requires you to edit the game’s .ini files, which means that this method only works on the PC version of the game.

You’re looking for a file called “Engine.ini”. You can find this .ini file in the following directory:

Open the .ini file with a text editor app like Window’s built-in Notepad, and you’ll see a line with [Core.System] in it, followed by a bunch of lines with paths in them. Scroll down, and you’ll see another section titled [WindowsApplication.Accessibility].

You’ll want to create a new line after that section, so after the last line under the accessibility group, hit enter/return to create a new one. Then, paste the following text:

Now, relaunch Tower of Fantasy and make sure your post-production setting is still set to low. Log into the game, and the difference should be immediately noticeable. We hope this makes the game way more enjoyable for you, because it certainly did for us!

That concludes our guide on how to disable motion blur in Tower of Fantasy. If you have any other questions, please let us know in the comments below!

How to Disable Motion Blur in Tower of Fantasy