Home Game Guides How to Defeat the Inkquisitor in Fortnite 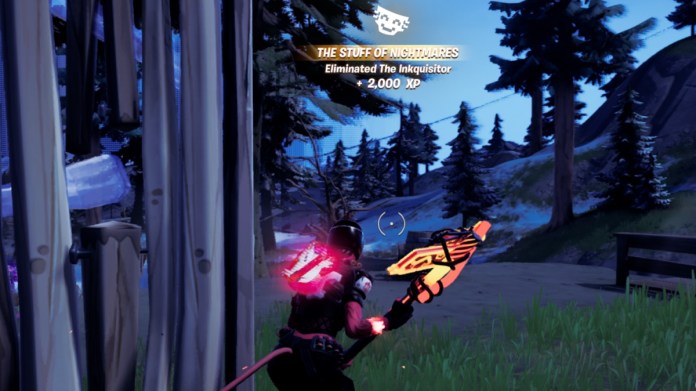 Fortnite Chapter 3 Season 4’s Halloween event has begun. Fortnitemares 2022 brings new places to explore, new weapons, new NPCs and new bosses! One of these big bads is The Inkquisitor: defeat him to gain his Mythic Suppressed SMG. Find out below how to defeat the Inkquisitor in Fortnite.

Defeating The Inkquisitor in Fortnite

The Inkquisitor is a new big bad boss to fight in Fortnite Chapter 3 Season 4. He was introduced during Fortnitemares 2022. He lives in the Grim Gables basement where he can be summoned and battled for his Mythic Suppressed SMG. Eerie symbols can be found on the dirt floor of the basement area under the Grim Gables house. When walked over by a player, the fires will be lit, and the symbols will glow red.

The Inkquisitor is a boss who will attack on sight so it is best to approach only when you have plenty of weaponry and ammo! He uses a Pumpkin Launcher and Firefly Jars both of which can deal great damage when they get a direct hit. When the Inkquisitor appears, deal some damage to him straight away and then move before attacks.

Related: How to Find and Use the Pumpkin Launcher in Fortnite

We suggest using medium and long range weapons to avoid being hit directly with a Firefly Jar, and to give you time to hit and run for protection. We used an Explosive Goo Gun, which proved to be very effective. This projectile weapon covers him in goop, which then explodes and causes damage: the more goop you manage to hit him with, the more damage is done.

The Inkquisitor is a tough boss but he is definitely beatable if you keep moving. Zombies may pop up out of no where so watch out for them too! It is handy to have a shotgun or SMG to fight off the zombies quickly.

The only other thing you should look out for are other players coming to third-party your fight. It can be pretty frustrating to defeat a boss only for another player to come and eliminate you when you are already badly damaged.

When the Inkquisitor is defeated, he will drop a Pumpkin Launcher, Chug Splash, and his Mythic Suppressed SMG.

The Mythic Suppressed SMG takes light bullets and can cause 187.2 DPS, with a headshot multiplier of 1.75X. It functions just like a regular submachine gun, but with much better damage and reload stats. Players can also reload while aiming, which is pretty useful.

That is all you need to know about defeating The Inkquisitor in Fortnite. Next up, why not check out what else is new in this latest update for Fortnitemares? Good luck.

How to Defeat the Inkquisitor in Fortnite