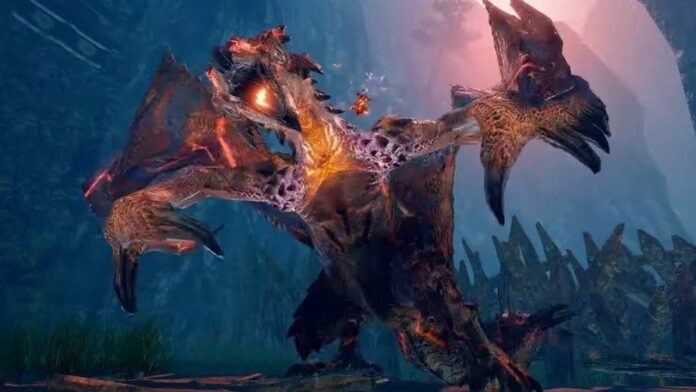 Monster Hunter Rise features an extensive monster lineup that also includes more powerful variants of select monsters. These monsters, called Apex Monsters, appear mostly during the Rampage, forcing players to take advantage of hunting installations to take them down and save the village from destruction.

Apex Monsters can also be taken on directly, although you will need a solid strategy to take them down. Here’s everything you need to know to take down Apex Rathalos with ease.

Apex Rathalos is a Rathalos so powerful that it has managed to survive many hunting attempts, rightly deserving to become an Apex Monster. Like the base Rathalos, Apex Rathalos is weak against Dragon and Thunder, can deal Fire damage, and inflict Fireblight and Poison. Gear yourself up accordingly to make the fight more manageable.

Where to Find Apex Rathalos

Apex Rathalos can be found in the Lava Caverns, starting in Areas 9, 11, and 12 and in the Infernal Springs. The monster also appears in Rampage Quests as a Major Threat.

How to Defeat Apex Rathalos

Apex Rathalos is an extremely powerful monster whose attacks can deal Fire damage and inflict Fireblight, so you will need to bring gear with Fire Resistance to reduce damage and have a much higher chance of making it out alive. You can also eat dangos with the Fire Res (Hi) skill to increase your elemental resistance.

You will definitely need to have as much Fire Resistance as possible to survive the powerful King’s Ascension Attack, which can one-shot most hunters if they are not using the proper gear. Apex Rathalos soars to the sky before unleashing this attack, so make sure to get as far as possible from the monster, as the fireball it launches has a huge area of effect.

Apex Rathalos doesn’t have a lot of weak points to target. Cutting the tail is something you will want to do as quickly as possible, as it reduces the range of its tailspin attacks, which can be difficult to avoid if you’re fighting the monster in the solo quest, where there isn’t a whole lot of space available to avoid attacks.

Apex Rathalos often takes it to the sky, making it difficult for hunters with melee weapons to attack the monster. As such, you may want to use ranged weapons like the Bowguns and the Bow to make the fight shorter. Or, if you really do not want to switch weapons just for this fight, you can use Flash Bombs to bring the monster back down and stagger it temporarily to leave it open to your most powerful combos.