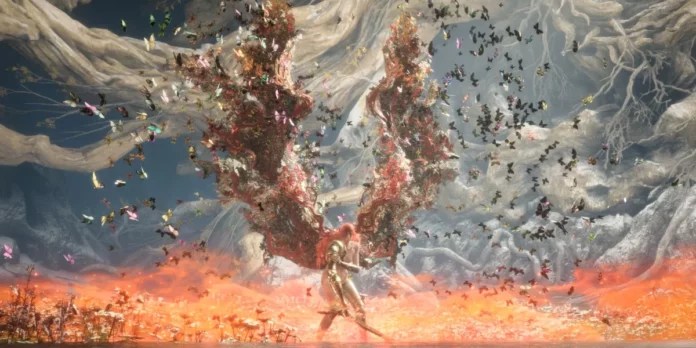 The Soulsborne games are known for their difficulty level, and Elden Ring is no exception. Each location has its own level of difficulty, some being less difficult than the rest. Some locations hold special items, ashes, and armaments that make the game a whole lot easier. One of the more difficult locations is Miquella’s Haligtree and the very reason for that is the beast that is Malenia, Blade of Miquella.

Malenia, Blade of Miquella is a Boss in Elden Ring. Born as a twin to Miquella, Malenia is known as the most powerful of the Empyreans. Wielding a prosthetic arm and leg, courtesy of Radahn, Malenia is located in Elphael, Brace of the Haligtree.

This boss is optional, as players do not need to defeat it in order to advance in Elden Ring. This is done intentionally with very good reason because Malenia is also widely considered by the Elden Ring fanbase to be the most devastatingly punishing boss in Elden Ring.

“…Heed my words. I am Malenia. Blade of Miquella. And I have never known defeat.”

Starting off with these iconic words as Malenia, Blade of Miquella, she launches a barrage of slashes, grabs, and her signature Waterfowl Dance that is almost impossible to dodge. Oh and by the way, every attack heals her, so there’s that. Once the player struggles and finally defeats her, they’d think the nightmare is over, but oh no.

As is typical of most of FromSoftware’s toughest bosses, Malenia has a second phase wherein she blooms and is born anew as Malenia, Goddess of Rot. In this phase, not only does she retain her old moveset, but her ability to fly and bloom spreads the Scarlet Rot status with each attack. If players thought her Waterfowl Dance was bad before, being imbued with Scarlet Rot makes it infinitely more dangerous.

With all of these insanely powerful attacks, players have wanted to know if there was a way to make this fight easier, by using cheese tactics. Fortunately, we know of a few.

There are three specific cheese tactics that work against Malenia:

Personally, I am not a big fan of the cheese strat, but in the end, games are about having fun, so don’t shy away from using strategy and tactics to win difficult fights, because hey, the game gives you these tools to do so. It would be a waste to not use them, right?

How to Cheese Malenia in Elden Ring on Steam Deck