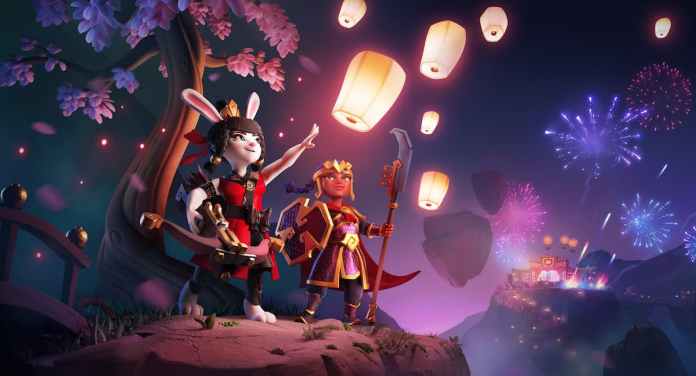 How to 3 Star Challenge

In the Lunar New Year Challenge, players have to raid a base and get three stars on it. This base’s defense includes a poison spell tower, six inferno towers, and an abundance of hidden teslas and skeleton traps. Players are given a hybrid army featuring queen charge with lavaloon.

The traditional lavaloon attack strategy may not be enough to secure a three star victory. For this guide, we will be following YouTuber Judo Sloth’s guide to clear the Lunar New Year challenge.

The Lunar New Year Challenge base is covered with skeleton traps and hidden teslas. To avoid disruptions during the attack, we have to set them off early. Place one wall breaker to the bottom right air defense, two near the right gold storage, and one between the hidden tesla and Grand Warden. Drop two more wall breakers near the right air defense and cannon to trigger more skeleton traps and hidden teslas.

2) Use balloons to wreck hidden teslas

Players will now have to use 1-2 balloons for each hidden teslas discovered in the first step. One balloon is typically enough to destroy a hidden tesla, but players can drop a second one if required.

Uncover the hidden teslas near the statue in the far right corner of the base. Use a bunch of balloons to destroy the group of teslas.

Drop a barbarian near the statue in the far right corner to lure skeletons. Then, drop the Archer Queen near the same statue, followed by five healers, and use a poison spell to kill all skeletons easily.

4) Destroy hidden teslas near the south and deploy the Barbarian King.

The Queen Charge should be making its way into the core of the base. When she makes contact with Grand Warden, deploy one valkyrie and a rage spell over the queen to force her into the core.

6) Use balloons from clan castle to destroy spell tower

Use balloons to wreck the village’s core, having a poison spell tower and an X-bow. Drop a few more balloons in the south to support clan castle balloons in destroying hidden teslas.

7) Use the queen charge ability to save the queen

Your Archer Queen will be in grave danger when fighting the defending heroes. Keep an eye on your Archer Queen’s health. If needed, feel free to use her ability to go invisible.

Drop one rage spell on the left group of inferno towers and a second one on the right. Use a healing spell between two inferno tower groups. Then, drop lavahounds and use the rest of your balloons to form a ring around the inferno towers.

This should be more than enough to clear the base. If you fail to get a three star, you can always try the challenge again to get 100% clear.