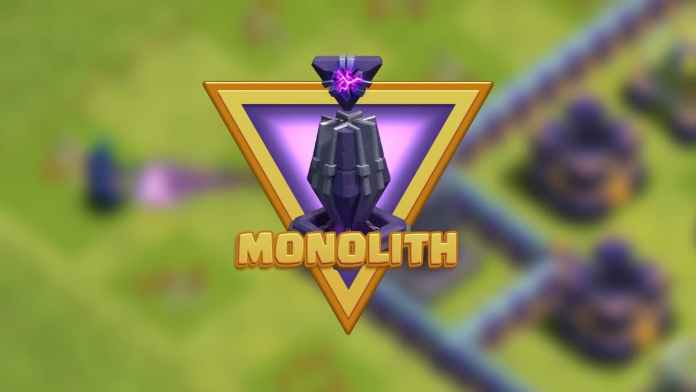 Supercell has finally added Townhall 15 to Clash of Clans. It had been over a year since the last Townhall update, and players eagerly awaited a new level. Townhall 15 update has surprised everyone with many game-changing features such as Spell Towers, Monolith, and Electro Titan. This guide talks about the powerful Monolith defense in Clash of Clans.

Monolith in Clash of Clans: Everything You Need to Know

“The Builder’s first experiment in using Dark Elixir for a building resulted in something truly frightful. The stronger the Monolith’s target, the more damage it does. Great to have defending your Village, but a little scary to attack against.”

Monolith is the first defensive building in Clash of Clans that costs Dark Elixir. Supercell added Monolith to counter the mighty heroes. This defense works best against troops with high health points, making it deadly for all heroes and units like Electro Dragon, Electro Titan, Dragon, and Golem.

Monolith is unlocked after reaching Townhall level 15 in Clash of Clans. After upgrading their Townhall to level 15, players can purchase Monolith from the Shop for 300,000 Dark Elixir.

Monolith Stats in Clash of Clans

Monolith’s every hit reduces a unit’s HP by a fraction of its maximum health. Here are the stats and cost of Monolith in Clash of Clans:

At level 2, Monolith’s every attack hits 300 and 15% of the unit’s max health points. Players are recommended to put Monolith in the core of their base or near the Townhall. If ignored, the Monolith can wreck the enemy’s heroes within seconds.

When going against the Monolith, players are recommended to bring enough Freeze and Invisibility spells. Losing a hero to Monolith can ruin your attacks in Clash of Clans.

Related: How to Unlock Electro Titan in Clash of Clans

How to Get and Use Monolith in Clash of Clans