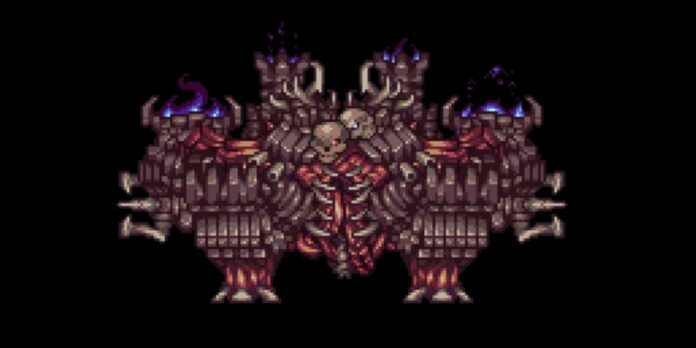 Terraria is a wondrous adventure that will take you through all sorts of biomes to fight lots and lots of terrifying bosses. The good thing is that once you’re done with the main adventure, Terraria has expansive mod support, and one of the biggest and most popular mods to date is the Calamity mod. The Calamity mod introduces many new bosses to fight and gear to find and collect, and one such boss is the Ravager. Today, we’ll show you how to beat the ravager in Terraria!

What is Ravager in Terraria

The Ravager is a hulking mass of flesh and bone, and it looks as horrific as it sounds. The Ravager is a hardmode boss, which means you’ll have to defeat the Wall of Flesh boss before you can fight it. This monstrosity came to life through nefarious black magic as a desperate attempt to fight back against the Jungle Tyrant’s forces, but ultimately its creators died in the war, and now you must put an end to its mindless rampage.

The Ravager can be summoned after you’ve defeated Plantera and made your way through the jungle temple. You’ll need to use the Death Whistle, which is crafted using 5 solar tablet fragments and 10 lihzahrd bricks. This boss drops Life Alloys, Cores of Calamity, and bonus materials through the Fleshy Geodes, so you’ll need to defeat it to progress through Calamity.

How to Beat Ravager

Gearing up for the Fight

Before you take on the Ravager, you’ll need a wide arena to fight it in. You fight the Ravager on the surface world, so you can build an arena — preferably a long, flat arena — anywhere you’d like. We like to use wooden platforms for our arenas for easy maneuvering between them. You’ll want to build multiple layers of paths, just in case.

For gear, you’ll want to bring your strongest sets. The Hydrothermic set is a good choice if you don’t have a preference, but if you prefer the class sets (Plague Reaper, Brimflame, etc.), those are great choices too. For accessories, we recommend bringing something that lets you dash, as it’ll help you dodge many of the Ravager’s attacks. Aside from that, choose your favorite accessories!

For weapons, you’ll want to bring anything that can let you attack from afar. Attacking the Ravager with up close melee weapons is a dangerous proposition, so if you’re a melee class, we recommend the weapons with projectiles like the Fallen Paladin’s Hammer or Terra Lance. Ranged, summoner, mage, and rogue classes should just stick with their strongest weapon at the moment. Good choices include Malevolence, Plague Staff, and the Resurrection Butterfly.

Related | Party Girl in Terraria: Where to Find and Why They Are Needed

Once you’re ready, head into your arena and use the Death Whistle to summon the Ravager. The Ravager, initially, acts very closely to the Golem, as it will jump into the air and try to slam down on you. Fly over the Ravager or use a dash to get under it quickly to avoid getting squashed. If this move hits you, it’ll inflict Armor Crunch, which lowers defense — something you really don’t want during this fight!

Its body is made of multiple parts, with each part firing projectiles at you, so you’ll want to stay mobile to avoid the onslaught. The Ravager has two claws on the side that will shoot out at you to try to punch you, so be careful about this and stay on the move to avoid them. They shoot out faster when they’re close to death, so keep the pressure on while maintaining a safe distance.

The Ravager’s head periodically launches slow moving missiles that home in on you. The missile deals heavy damage, so keep moving to avoid it, and it will eventually detonate on its own.

Deplete the Ravager’s health bar all the way, and it will enter its second phase. Ravager’s head will detach from the main body and begin to fly after you, pelting you with bolts that can light you on fire. It will continue to try to stomp on you, and it will do so with higher accuracy.

During the second phase, the Ravager will inflict the Weak Petrification debuff on you, which disables mounts and bonus jumps, while cutting flight time in half. You’ll need to be very careful about when and where you use your flight, so be careful! Keep running and use your dashes to avoid the onslaught, and once you take out both the head and main body, you will be victorious!

In Expert Mode, the Ravager gains a few new attacks to its arsenal. In addition to the stomping, the Ravager will now summon two rock pillars that slam together to smash you, inflicting Armor Crunch. It will also two blue torches around you that shoot fire into the air. You’ll need to stay in the air and maintain greater distance from the Ravager to avoid these attacks.

In the harder modes, the Ravager does not gain any new moves thankfully, but it becomes much more aggressive. The Ravager will attempt to stomp you more often, and all of its projectiles are a lot faster. The blue torches shoot more fire, the head’s homing missiles track you faster, and everything is just way speedier.

Also, it should be noted that the Ravager’s health and damage increase significantly once you defeat Providence, one of the later bosses. Defeating Ravager after you’ve taken out Providence will cause it to drop Necromantic Geodes which contain Bloodstones.

That about covers all you need to know about beating the Ravager. If you have any other tips or tricks to share, let us know in the comments below!

How to Beat Ravager in Terraria | Everything You Need to Know