Homescapes is a widely popular casual mobile game that offers engaging mini-games and much more. While the game offers around 5200 levels with around thirty new levels releasing each week, Homescapes is almost a neverending mobile game.

Even though there are thousands of levels in Homescapes, most of the players are stuck in level 24. Beating Homescapes Level 24 is a daunting task for newcomers.

Also Read: Genshin Impact: How To Get Fischl For Free

Some veteran players also say that the one who clears Homescapes LVL 24 can easily clear the next levels with ease. So, today we are going to talk about some tips and tricks, along with a video showcasing how to clear Homescapes LVL 24.

Homescapes is a free to play puzzle game developed by Playrix currently available on Android and iOS platforms. 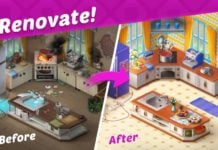