Home Game Guides How to Beat Gawrilla in Lords Mobile 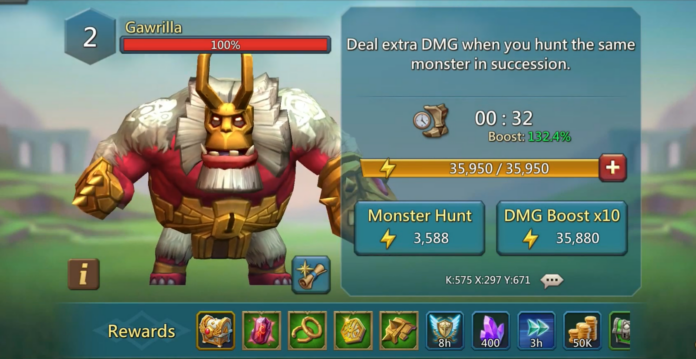 Lords Mobile is a very addictive real-time strategy game. Players can fight with other players and also play in other modes. One of the most important of these is Monster Hunt. In this mode, players use their heroes to fight various powerful monsters, and in this guide, we will tell you how to beat Gawrilla.

Gawrilla is a Normal monster that is also called Tusker. It spawns just like other normal monsters. It stays on the Kingdom Map within 2 hours and 55 minutes. However, it stands out from the rest thanks to its stats. Gawrilla deals massive physical damage, breaking through any physical-type defenses. In addition, the monster will attack the hero with the highest maximum health. And since its attacks deal damage in an area, nearby heroes will also be affected. Therefore, the best solution would be to attack Gawrilla with magic. Since each monster has 5 levels, the hero sets will also be different. Let’s start with paid heroes:

And here is the list of free heroes to beat Gawrilla:

You can use any other heroes with magic damage, but the teams described above are the best for defeating Gawrilla.

How to Beat Gawrilla in Lords Mobile