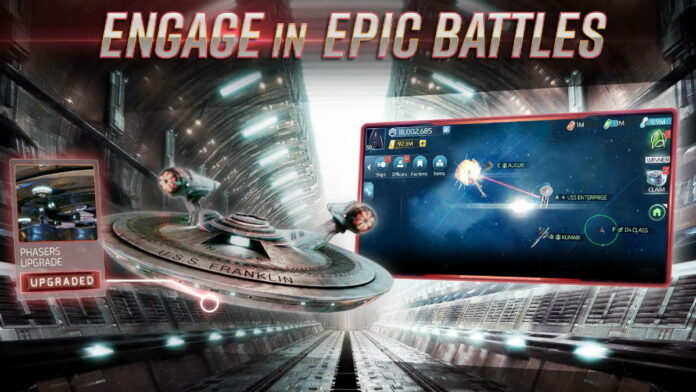 Star Trek Fleet Command, as mentioned, is a real-time strategy game, meaning that the game continues to move on with or without you. This means that other players on your server can be active while you’re not, and vice versa.

To create an immersive universe where anything can be at risk, players are allowed to attack other players’ ships, and only ships, once they’ve reached level 10. If you want to attack another player’s ship, send one of your ships nearby.

Before you attack, you can scan enemy ships for a detailed examination. You can see your target’s current condition, exact strength level, and if they’re carrying any cargo. You can then decide if it’s worth the risk and time to attack it.

Once you’re ready, tap on the ship you want to attack and tap the attack button. Your level isn’t high enough to attack if the button is grayed out, so you’ll need to spend some time building up your station if that’s the case.

Fighting player ships is very similar to fighting NPC ships, so make sure that you have the advantageous ship type and your ship strength is high enough. If you need a refresher, Battleships (Bomb) beat Explorers, Explorers (Star) beat Interceptors, and Interceptors (Wing) beat Battleships.

If you win the battle, you might get a PvP chest for your troubles, plus whatever cargo they were potentially carrying. Just expect a counterattack at some point, and be ready.

Once you hit level 15, you are now eligible to launch assaults on player owned stations. Since the stakes are much higher, the rewards are even better. You’ll have to break through their ships, plus whatever station defenses they have running.

Bring your strongest ships, because you’ll need every ounce of power you can get. If you manage to successfully raid the station, you’ll steal some of the player’s resources, including Parsteel, Tritanium, and Dilithium. You also have a chance of earning a PvP chest.

You can get a lot of resources from raiding other player’s ships and stations, but every action has a consequence! The targeted player will most likely come after you at some point, and it’ll be even worse if they’re a part of a large alliance. Choose your targets wisely!

That concludes our guide on how to attack other players in Star Trek Fleet Command. If you have any other questions or tips, let us know in the comments below!

How to Attack Other Players in Star Trek Fleet Command