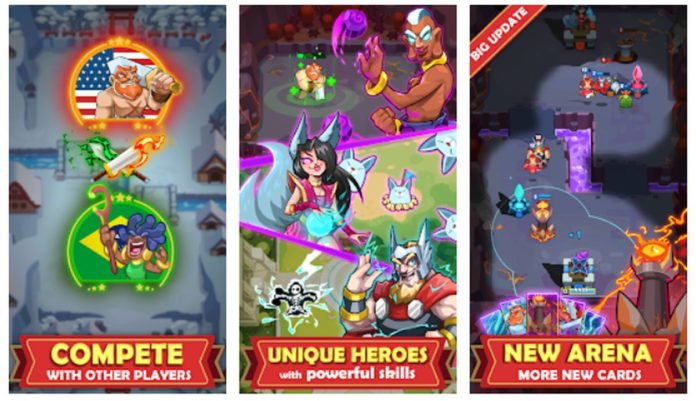 If you want to improve your game, our Hero of Empire tips and cheats in today’s guide will help you learn everything there is to be known. You will learn how to win more battles, how to set up the perfect team and much more!

Created by Bravestars Games and fully titled Hero of Empire: Clash Kingdoms RTS, this mobile game follows a familiar route similar to Clash Royale, for example. But it also infuses the genre with enough original features to make the game unique and extremely fun to play. Challenging and addictive – this is how I’d describe it.

But let’s see how to play it better. Here are our Hero of Empire tips and tricks.

It’s a good strategy to be patient early on in the game. Wait for your mana pool to fill up and try to force your opponent into making the first move.

This gives you a chance to play 1-2 cards of your own that will completely negate their played card and give you a massive early advantage.

If this strategy doesn’t work and the opponent plays the waiting game as well, you can always try to surprise them by launching attacks on two sides as soon as your mana pool is filled: launch on one side and wait for their counter, then quickly launch a surprise attack on the other side.

Expand to the mana pool ASAP

One thing you can do while waiting for your opponent to play their first card is construct a building (if you have it available from the beginning) so that you expand your territory to the mana pool.

This gives you a massive advantage as it recharges your mana faster, allowing you to place more cards than your enemy.

At the same time, make sure to always keep an eye on the mana pool in your opponent’s territory and take out the buildings there as soon as possible to negate them this advantage.

Know the strengths and weaknesses of card roles

Hero of Empire follows the basic rules of the Rock, Paper, Scissors game. This means that a unit is strong against another and weak against a third.

Know your cards and upgrade only the best ones

You will be tempted to spend your coins on upgrading everything that you can when you start playing, but that’s far from the best strategy.

While it is true that you do need to level up your cards in order to make them stronger, you should do it rarely early on. Keep your resources until you have unlocked a nice pool of cards to choose from and especially for when you know how good or bad a card is.

During these early stages, try our various cards and decks and strategies and see which work best for you. Then invest in those cards and keep using them, perfecting your strategy.

Keep in mind that rarer cards are generally better than more common ones, but you should have a nice mixture of rare and common cards, as well as expensive and cheap ones in order to be prepared for any in-game situation.

How to build the perfect deck in the game?

With so many cards to choose from and just 7 to take into battle, building the best deck you can is definitely a challenge. However, things get a bit easier at least if you follow these basic guidelines:

– Keep the cost of your cards as low as possible. Don’t play high cost cards only, because you will be obliterated. Don’t go with the cheapest cards only either, as you need the boost of a strong, expensive card.

– Make sure that, no matter what, you have one building-type in your deck. Ideally a cheap one (the mine still works good imho) that you can quickly build to expand your territory

– Mix and match the various troop types. Don’t focus on a single type of unit and have a couple of each in order to easily be able to counter your opponent or get an advantage. Air units are special here because many (or at least some) of the units in the game can’t target them.

– Try to have card combos in mind. Pairing a Tank with some archers makes it more difficult for your opponent to counter.

If you still don’t manage to find that perfect selection of cards, there’s no shame in looking at the champions. You can see the best placed players in the world and, even better, take a look at their cards.

While some will be Premium users that spend a lot of real life dough in the game, you can still get an impression of which of the more regular cards are perfect for the game. Or just know how to invest your real life money if you have this option. There’s no shame in investing in games you love!

Be careful when sending the Hero into Battle

One of the cards that you can get in your deck is your Hero card. That can be played when you have enough mana… but you should be very careful when using it.

Normally, the hero will be on top of your base, protecting it for free. But if you play them from your deck, they will appear on the battlefield by disappear from your tower.

This leaves you vulnerable to potential attacks, as the tower will no longer shoot at incoming enemies. It will return once it is defeated, though.

So whenever you decide to send your hero onto the battlefield, make sure that there isn’t the risk – at least on short term – for the enemy to get close enough to your tower!

There are multiple game modes in the game – the first one being the traditional, Arean-based gameplay and the other called the “Fog Mode” Challenge.

The latter brings an interesting thing into the mix: the fog of war concept. This means that you don’t see from the beginning what happens in the opponent’s half (and they can’t see what you do).

In order to see what happens there, you can either expand your reach using buildings or send troops in the opponent’s area. But the fog will cover the field if your troops are destroyed.

All in all, this is a really fun – although challenging – game mode that should be tried and mastered. That is where I am getting Golden Packs as well, making it easier to progress and build a really strong deck.

Keep your keys for Golden Packs

I always recommend to have a key saved up in case a Golden Pack pops up as a reward: it’s not something you want to skip!

You don’t have to hoard a ton of keys though, waiting to open Golden Packs only: the Silver ones can have good cards as well, but in lower numbers. In the end, you need all the cards you can get… but do keep a spare one nearby just in case.

Watch ads to get more cards from Packs

A nice way to boost the number of cards you’re getting from a draw is to watch a video ad and get more.

This can and should be done each time you open a new card pack. Yes, you do get the reward randomly as you can’t choose the card you multiply, but it’s still better than nothing.

Buy cards from the store

Make sure to keep an eye on the in-game store! From there, you have the option to buy cards individually for regular coins.

Sometimes, you might need just one card to upgrade a very important one for your deck… or you might somehow end up sitting on too many coins to handle. Either way, the store can have some really pleasant surprises for you.

Don’t start spending early and often there: you will need the coins to upgrade your existing cards, and those upgrades become really expensive really fast. But if you see a card that you must have, by all means, get it!

This would be all for Hero of Empire: Clash Kingdoms. If you have additional strategies that you want to share with fellow players, don’t hesitate to let us know by commenting below.