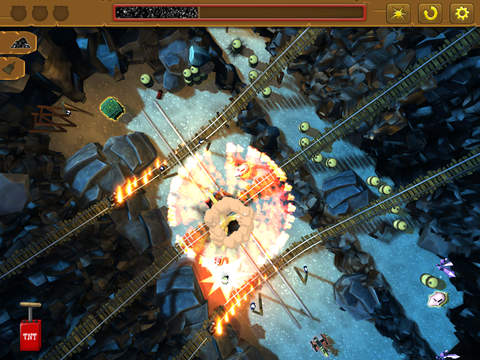 For a puzzle game to really stand out from the competition on the App Store, it really needs to be an excellent game with plenty of unique features. That’s exatcly what Gunpowder, a new physics based puzzle game developed by Rogue Rocket Games, is: a unique puzzle game that will catch players’ eyes with its beautiful graphical style and keep their attention with a masterfully crafted and engaging gamplay experience.

In Gunpowder players will take on the role of Incendio, who decides to bring justice to his village by trying to recover the money taken from Boss Grimshaw to build a railroad. To recover the money taken by force, players will have blow up piles of loot by using explosives. The cartoonish premise is enhanced by the beautiful graphical style inspired by classic cartoons from Looney Tunes with comic-like cutscenes between levels, colorful locations and more.

Gunpowder includes 125 different stages divided into five different chapters where players have to create a chain of explosions to blow up the loot pile at the end of each stage. To do so, players will have to place a limited amount of gunpowder so to string explosives together. Things are quite simple in the beginning,  maybe too much as the first few stages really feel dull and boring, but things improve considerably soon, with more elements such as TNT, cannons and more adding some welcome complexity that will make players think long and hard on how to trigger these explosions and complete stages. Even though later stages are more complex, players will hardly feel frustrated as the puzzles are never too obscure. And even if they are for some, it’s possible to just skip a stage and complete it at a later time. Those looking for collectibles will be happy to know that each stage also includes three piggy banks, which are used to unlock more stages. Including the piggy banks in your chains is also quite satisfying, even more than just completing the stages as quickly as possible.

Gunpowder is a really good physics based puzzle game where every element, from presentation to actual gameplay, has been masterfully crafted to offer a unique experience that’s like very few others on iOS. The asking price, $4.99, may seem a bit steep for some but there’s enough quality and content in the game that it’s completely justified.