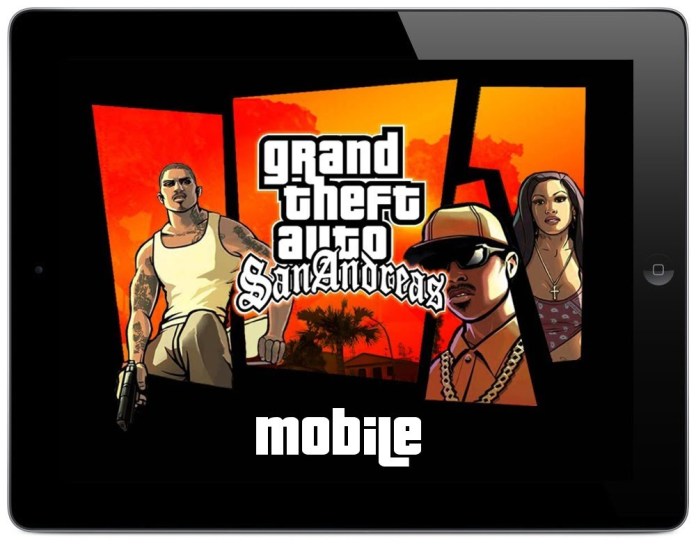 San Andreas is also one of the biggest game of the series, packed with a huge amount of contents. It’s so big that it takes hundreds of hours to discover everything in the game. Considering the scope of the game, it’s really impressive to be able to play it on mobile devices. This really shows us how much technology has advanced since the original PS2 and Xbox release of the game.

San Andreas stars CJ as the game’s main character, who has just come back to the city of Los Santos after long years of absence. Grove Street is definitely not what it used to be and it will be up to CJ to make the gang as strong and fearful as it once was. The game’s plot is incredibly good still today thanks to a lot of twists and some very crazy characters. To be completely honest I prefer Vice City’s plot but it’s only a matter of preference.

The basic gameplay formula is not too different from other Grand Theft Auto games. You will be able to move the story forward by taking on Story Missions or indulge yourself in the many different side activities found in the game. For the first time in the series, San Andreas introduced some light role playing game elements. Thanks to them you are able to alter your appearance and stats in a few different ways.

But you probably already knew all that. San Andreas is one of the best selling titles of the series so many already know what the game is all about. If you’re reading this review, you probably want to know how the iOS port is, compared to the original releases.

The iOS version of San Andreas is probably the best way to enjoy the game. The game’s graphics have been evidently enhanced, making the game run like it did on high-end PCs back in 2008. The draw distance is really good, the framerate is solid, load times are almost non existant and all characters models have been vastly improved. Cloud Saves support is a really welcome addition, allowing players not only to enjoy the game on different devices but also to keep backup saves. This will help players getting out of some complicated situations by simply using an older save.

While it’s true that San Andreas on iOS comes with physical controller support, I feel like very few players will actually take advantage of the option. The touch screen controls are some of the best on iOS devices thanks to the many different schemes and options like digital and analog steering, invert look and more. I’m not someone who likes touch controls too much in action games, to be honest, but I didn’t feel like they were getting in the way of enjoyment in this game. This shows how much care Rockstar put into this port.

Grand Theft Auto: San Andreas is an excellent game that different type of gamers will surely enjoy. The iOS port has managed to the impossible: improve an already great game.