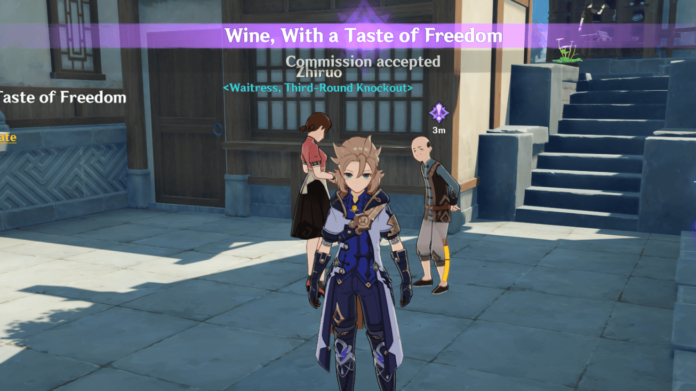 Wine, With a Taste of Freedom, is one of the many daily commission quests in Genshin Impact. In this daily commission quest, players have to interact with the owner, Degui of the Third-Round Knockout tavern located in Liyue Harbor. Upon interacting with Degui, we come to know that the business of Third-Round Knockout tavern is declining and attract more customers Degui is planning to add Dandelion Wine. And for that, players have to give Dandelion to Degui to complete the quest.

Dandelion is a florae exclusive to the Mondstadt region of Teyvat. And, to progress Wine, With a Taste of Freedom daily commission quest players must find a dandelion. The best place is in-front of Mondstadt city gates. Travel to Mondstadt city gates and turn left or right, in both direction you can find Dandelions.

In order to extract Dandelion seeds from the flowers, players have to use Anemo attacks. To complete the quest, players need only one Dandelion seed.

Assuming that you have a dandelion seed, if not check out this guide – Where To Farm Dandelion Seed In Genshin Impact. Travel back to Liyue Harbor and talk to Degui. Give him the dandelion seed.

Now the general reward for Genshin Impact’s Wine, With a Taste of Freedom daily commission quest is 10 Primogems and 2 Silk Flowers. However, players get additional rewards, based on their Adventure Rank.