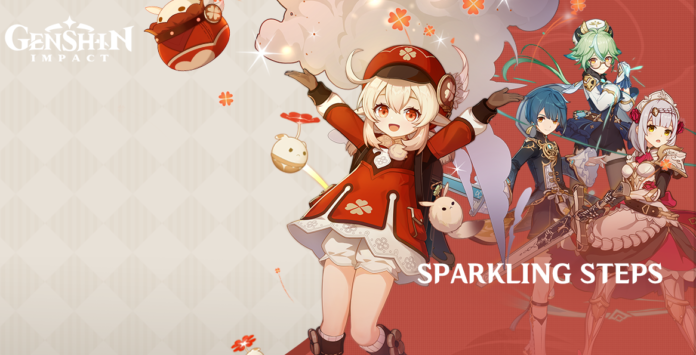 Genshin Impact new event wishes banner will begin from tomorrow and with that, we are going to get a brand new 5-Star playable character “Klee”, who seems to be a pyro user. The upcoming wishes banners are officially called “Sparkling Steps” and “Epitome Invocation”. The venti banner is replaced by Sparkling Steps banner and, this time we will have Klee as the main featured character.

With the introduction of new banners, we also have Klee, Xingqiu and Sucrose as new trial event characters. That is players can try them out as a part of fixed party line-up for free starting October 20, 2020.

Players will get rewarded to try out the characters listed in the new trial event just like the previous character trial event where we got free rewards for trying Venti, Barbara and Fischl.

Genshin Impact is a game that requires a lot of grinding to level up playable characters and pieces of equipment. However, the developers don’t promote grinding as there’s a resin system imposed on players. Where, you use resins to claim rewards from dungeons, world bosses and such other mediums.

There is a total of 120 resins that players can use per day. It gradually gets restored. However, the rate is too slow. Plus if players claim loot from high-level bosses or dungeons, they have to pay a hefty amount of 40 resins. Which is a lot of resins for just one claim. So, the free loot from the new characters trial event is something every player should claim as it does not require effort.

Genshin Impact is a gacha-based, free to play, role-playing game from miHoYo. The game released on September 28, 2020, across platforms including PC, PS4, Android and iOS. There is also a Nintendo Switch version of Genshin Impact planned to release later this year.