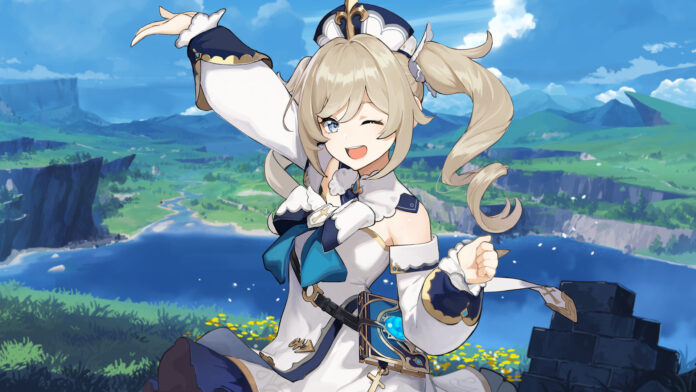 With that being said, let us check out the Artifacts and Weapons for Barbara – that can make her an even better character.

Barbara is a healer in Genshin Impact, her charged attacks deal with hydro AoE damage and they can also apply a hydro debuff to the enemies, hit by the attack.

We can use Barbara offensively, though we recommend players to use her as a healer – because there are other characters who suit the DPS character role even better(ex- Razor, Fischl, Diluc, Keqing, Xiangling etc).

To complement Barbara’s healing abilities we are going to use the Maiden Beloved Artifact set, and far as the weapon goes – we will be opting for Thrilling Tales of Dragon Slayers.

The best part about the maiden’s set is that it increase Barbara’s elemental offensive abilities, and the set bonus from this artifact set complements her abilities as a healer.

Why Thrilling Tales of Dragon Slayers is best catalyst for Barbara?

As we mentioned earlier, with Barbara’s best build – we are preferring a good offensive ability with the main focus on Support (healing, buffs to teammates). And, the newly introduced three-star catalyst Thrilling Tales of Dragon Slayers is the best option to chose.

The Thrilling Tales of Dragon Slayers catalyst offers a base ATK DMG of 39, with secondary stat as – raise in HP by 7.7%. It offers legacy skills, where – while switching characters, the new character taking the field has their ATK increased by 24% for 10s. This effect can only occur once every 20s