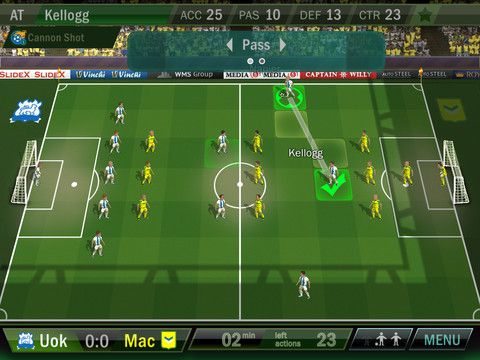 I find it really strange for a guy who loves basketball (and is pretty good at it) to love football simulation games, despite sucking at the real thing. Or maybe this is exactly the reasons why such games like Football Tactics seem so amazing – because they allow me to achieve things I could never achieve in real life, like sending my amateur team Drunktards all the way to the Premiership for eternal glory.

Football Tactics is a management sim slash tactical football sim and if you are already frowning, let me tell you what this means, exactly: you start the game by creating your own team (like my Drunktards) and selecting the league you want to play in. You can select tactics, change line-ups, substitute players, train your existing ones and even sign new ones, like you can do in all football management games out there. 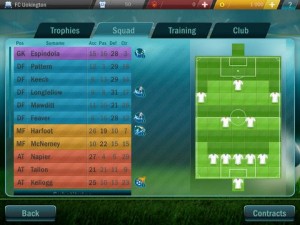 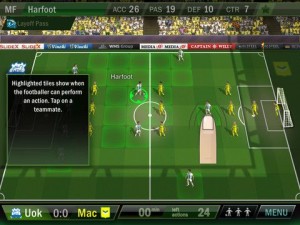 What’s special in Football Tactics is that you can also control the game in a turn based, tactical mode. Your players have three moves per turn and during that they can be instructed to pass to a specific player, move into a specific position, perform a specific move or, of course, shoot and try to score. In defense you will instruct players to tackle opponents, press them or simply do nothing if you’re already 4 to nothing and you simply no longer care.

Each player has a set of skills that will matter a lot when deciding the success of the action performed. Let’s say that we take our defender and have him shoot to score. Since his shooting ability is 5 and the shoot stopping ability of the goalkeeper is 40, he will fail miserably. However, he still has a random chance of scoring because there’s a sort of a dice rolling system in place to decide the actual number used (out of 5 in the case of the defender and out of 40 for the goalkeeper). Pretty interesting and really fun!

Most of the time will be spend playing the games and the management simulation is a bit on the light side, but this still doesn’t take away any of the fun of Football Tactics which came out as a surprise and turned into one of my favorite games this year. Go Drunktards!

Biggest bonus? The game is free to play and the developers just announced that they’re working on introducing PvP matches, which will certainly take things to a whole new level!

In conclusion, Football Tactics is that type of game that you get, you play and you can’t stop playing afterwards. It’s simply amazing, it’s rewarding and it does nothing wrong. Except for the fact that it keeps you playing when you should be working, sleeping or feeding yourself.