While no new entry in the Final Fantasy series is in development, not counting the Final Fantasy VII Remake, Square Enix is doing everything possible to make older entries available on as many formats as possible.

Announced during E3 2019, Final Fantasy VIII Remastered will be released on September 3rd worldwide. The game will be available for the price of $19.99, which may feel a bit high for a remaster, but there are some good reasons for it.

Unlike the other recently released older entries in the Final Fantasy series, Final Fantasy VIII Remastered comes with some more noticeable improvements. Graphics, in particular, look much better than they did in the original PlayStation release, which can be reason enough for fans to get the game.

Alongside the big graphics enhancements, Final Fantasy VIII Remastered will come with some additional features that will make it easier to enjoy the game. The game will feature Battle Assist options, which will allow players to restore HP, ATB Gauge and Limit Break, a Game Speed Boost and the ability to turn off random encounters.

Final Fantasy VIII is far from being the most difficult entry in the series, also due to how the Junction system can be abused from early on, but these additions are welcome nonetheless. 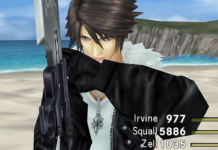