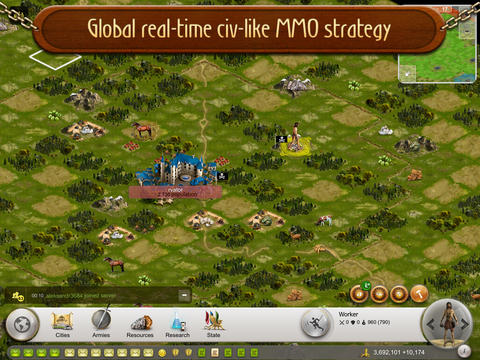 I have spent hundreds of hours playing games in the Civilization series and I have managed to bring glory to my civs by adopting various strategies, and I loved each moment of play. You can imagine how happy I was when I saw Fate of Nations released on the App Store, a project of incredible ambition that resembles the Civilization games in terms of concept, gameplay and looks. Do we have a winner here, the perfect game to help us make the wait for the upcoming Civ game a little easier? Check out our Fate of Nations review to find out!

The game starts with a very brief tutorial showing you how to move your characters around, and the tutorial pops up again every time you unlock a new unit, technology or building that requires special attention. Even as a seasoned Civilization player, I had a bit of trouble getting the ropes in term of controlling the units and navigating around, but once I got used with it (after about 5-10 minutes), everything seemed extremely simple.

Now, for a game that wants to re-create the Civilization concept on the small screen of an iOS powered device, Fate of Nations needs to be epic. And in terms of content and, as I already said, ambition, this game is up there at the top. Tons of details, data and mechanics, technologies to research and advances to be made, a humongous land area to explore, other players to interact with, treaties to sign, alliances to break, wars to start and end together with other real players… all these add to the incredible depth of Fate of Nations and are there to make every and any Civilization fan happy.

I personally believe that the game has also been pretty well thought for an online, continuous type of play: the research is fully automated, meaning that you don’t have to select what’s coming next, so that’s a good thing especially when you’re sleeping: your technology keeps on getting better and better. Basically, the turn based system of the Civ games has been replaced with a waiting time: you want your unit to move from a spot to another? You have to wait for x seconds. You want to build a new structure or train new troops? You need to wait some more. Everything, including the development of your towns, is a waiting game. Although upsetting in most occasions, it’s the only way they could’ve done this and since the waiting times are not incredibly long, we can all be pleased with the result.

The game does require you to be pretty active, though and especially early on you should log in often to explore the areas, train your troops and build up your cities. Interacting with other players also requires you to be online a lot so Fate of Nations is that type of the game that you have to kind of play continuously if you want to get better that the rest. It’s not the best of approaches, but for a game of such complexity, there really is no other way to do it. You can still play it at your own pace and log in once per day, but most likely you won’t be able to progress as fast.

So, conceptually, Fate of Nations is a game that’s done brilliantly. Unfortunately, the game itself is, at the moment of writing this review, one riddled with bugs and problems and performance issues. There are still a ton of text lines that appear in strange Cyrillic letters, making it impossible for you to understand them, but the most upsetting bugs are gameplay related: from the game recording my taps on a completely different square, to bugs in the pathfinding of your troops and buttons that don’t work at all, there are all sorts of bugs and problems that ruin the experience quite a lot. Probably (and hopefully) the developers are working hard to fix all these problems and we’ll soon have an experience as flawless as possible. Until then, I have a buggy game interface, I seem to be stuck with a city’s name I can’t even read (and the Rename button doesn’t work) and God knows what else…

Being a free game, Fate of Nations comes with a bunch of options for purchasing additional things in the game. The IAPs in this game are pretty decent and fortunately, you won’t feel obligated to purchase some in order to remain competitive. The Fates (premium currency in the game) can be used to speed up production which is extremely useful, but apart from that, it doesn’t seem to be needed for anything else. So the game is pretty balanced in this area, and comes as a great and pleasant surprise.

Fate of Nations is a great game because it is, well, Civilization. Just as complex as the game that it draws its inspiration from, insanely addictive and of epic proportions, the game has the potential to become an evergreen hit and the only game that you will play IF the developers decide to address the ton of bugs and problems that take out most of the fun from the game. When all things will work flawlessly, this game will be a blast. Until then, it remains that little game that wanted, but couldn’t. Looks like a game in alpha or beta stages!