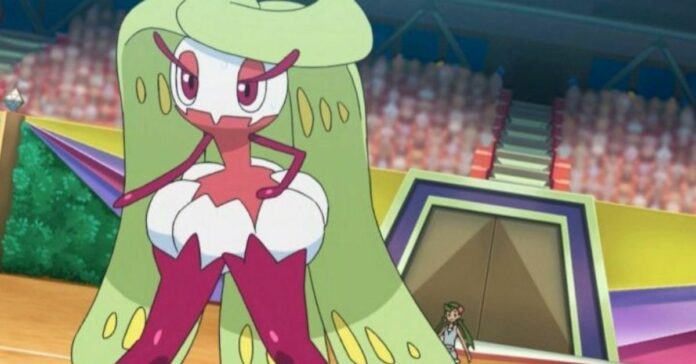 Each fan of Pokemon Unite is curious about the new Pokemon Tsareena. We already know that the pokemon will be an all-rounder and probably get the set of offensive and defensive stats. Also, we can suppose that Tsareena will have some Dash capabilities in the moveset, move fast in the reveal footage. It will be a massive plus to its stats (both Mobility and Scoring).

The fans noticed a fantastic jump in the air and lamming to the ground to hit the rival in the reveal footage. So, we can assume that that was a crowd control move! And this is a great utility move. One more activity that we noticed in the trailer revealed Tsareena was dashing through the opponent and leaving slowed while in the affected area. This move reminded us of the Trop Kick we faced in the previous Pokemon games. And the last but not minor activity was when the pokemon was launching the rival high in the air, and after that, we were shown special attacks performed by Tsareena. We can say that this move is the pokemon’s Unite move with no hesitations.

​What is Tsareena Release Date in Pokemon Unite?

So, after reading about Tsareena’s abilities, there is no doubt that all the fans are looking forward to playing this stunning pokemon. The estimated release date is currently set on the ninth of December, meaning that you will have a chance to meet Tsareena soon!

Moreover, it is known that every player who will log in to the game on the ninth of December at midnight UTC (4 PM Pacific) will obtain a Tsareena Unite license!

The release date is close, don’t miss the chance to try playing Tsareena in Pokemon Unite.