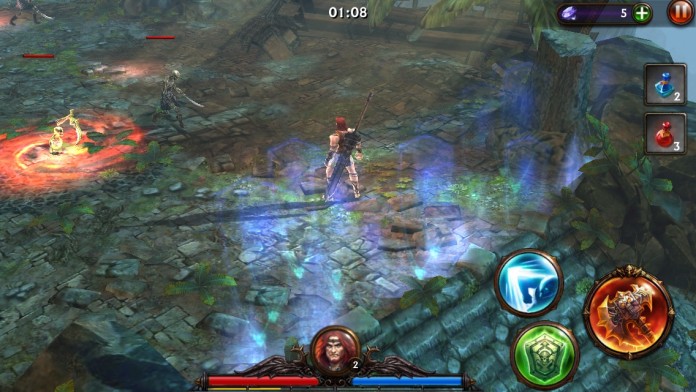 It’s no mystery that hack and slash games rarely go beyond the boundaries of the genre. And they honestly shouldn’t, as the only real thing these games have to do is provide some real fun with some intense action.

Eternity Warriors 3 is the latest entry of the hack and slash series developed by Glu Games. The whole gameplay experience is built upon the one featured in its predecessor, featuring several improvements that brings the whole experience to new heights. Eternity Warriors 3 doesn’t try to be different from the competition and this is probably its most redeeming quality. No fluff, just high speed action, loot and everything else that’s expected from a hack and slash game.

The three playable characters play quite differently from one another. The Warrior relies on his brute strength to deal huge amounts of damage; the Monk is not as strong as the Warrior but he’s way faster; the Mage specializes in magic, with some devastating elemental spells that can clear the screen quickly. The three characters can be improved during the course of the game by learning new skills, enhancing the already obtained ones and upgrade their equipment.

The basic gameplay experience doesn’t really change during the course of the game. Once you start playing, the only thing you will have to do is defeat waves of weaker enemies before reaching a slightly stronger mid level boss and a more powerful boss. The lack of gameplay variety is made less bad by the already mentioned customization options but it will eventually become a problem the more you play the game. The fact that your performance gets graded at the end of each stage is also a nice touch that motivates gamers in getting better at the game.

Loot also plays a big role in the game. Eternity Warriors 3 is pretty generous with it, awarding you with so many equipment pieces and customization items that will allow you not only to customize your character but also to experiment with the different equipment pieces. The weapon’s enhancement systems gives two different choices when upgrading a weapon, allowing for further customization.

A high speed hack and slash game requires solid controls and Eternity Warriors 3 definitely delivers in this regard. The control scheme works incredibly well, with a virtual stick used for movement while two other buttons are used for basic attacks and skills. The touch controls are very responsive and never get in the way of enjoyment.

The whole gameplay experience is even made more satisfying by the game’s presentation. The game’s visuals are truly impressive, with characters, enemies and locations featuring a huge amount of details. It’s the kind of graphics you would expect on a gaming console.

Unfortunately the game does have some flaws that end up hurting the experience a little. As I already said, the game will start becoming repetitive very soon. While it’s true that there are quite a lot of quests, they have very few differences with one another, forcing gamers to replay the same stages over and over. The quest mechanics show the grindy nature of the game, where even simple customization requires a huge amount of resources that can only be gathered with replaying stages over and over. Using real money with in-app purchases makes it less grindy, but it’s a design choice that drags the game down a bit. A multiplayer mode would have made things way better, as the grinding would be less bad when done together with other gamers.

Eternity Warriors 3 is a great hack and slash game that comes with a solid gameplay experience. It’s not the best game developed by Glu but it’s still one of the best free to play games released in recent times, despite his grindy nature and some other small flaws.