Home Guides Eternity Legends: All Heroes in the Game & Best Characters for Your... 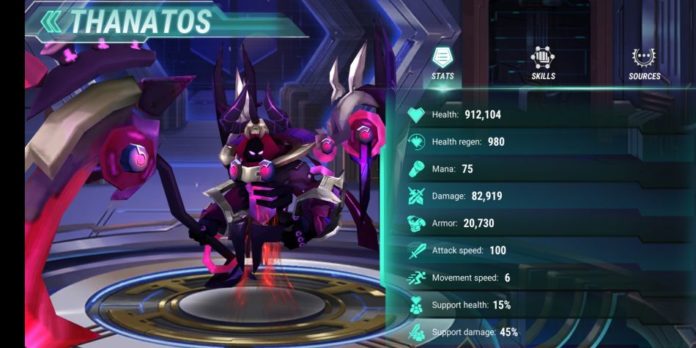 But if you ever wondered about all the available heroes in game, you’re probably going to need a guide, so that’s what we have for you! In this article, we have all Eternity Legends Heroes currently available in the game.

Divided into three sections (Offensive, Defensive and Support) we will show you everything you need to know about all Eternity Legends heroes. Also, after each category we have picked the best characters for your team according to their skills and potential (according to our preference, because we like OP heroes). So, let’s get started, shall we? 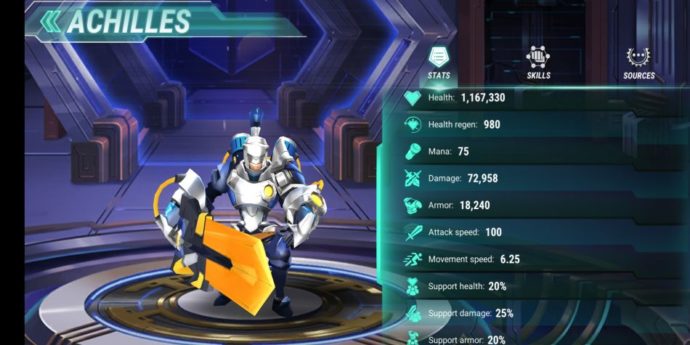 He is a strong machine able to go against multiple enemies at once.

Cleaver: Cleaves enemies in front, dealing damage to all enemies

Sword Slam: Slams his sword in a spiral around him and stuns all enemies.

Whirlwind: Whirlwinds his blade, dealing damage to all enemies around him 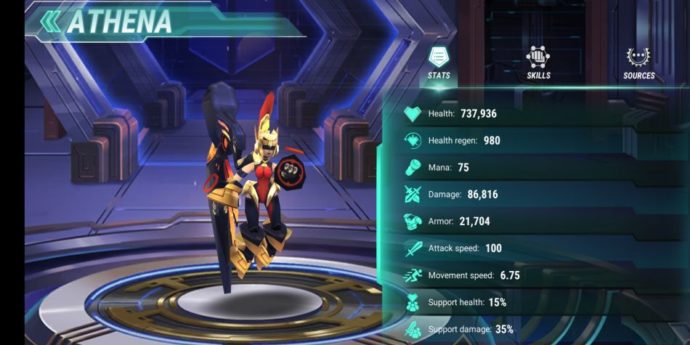 Sun Beam: Releases many waves of flame into enemies in front of her. 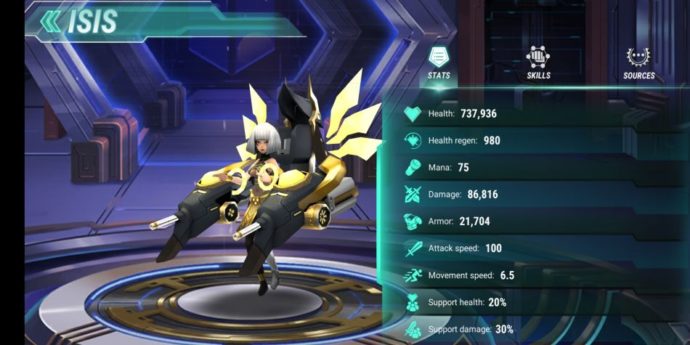 Isis is a strong ranged champion able to go versus multiple enemies.

Egypt’s Starfall: Justice will rain from above judging all enemies in sight.

Tic-Tac Boom: Plants a circle of bombs, exploding after a few seconds.

Sun Beam: Deals damage to all enemies on hit. 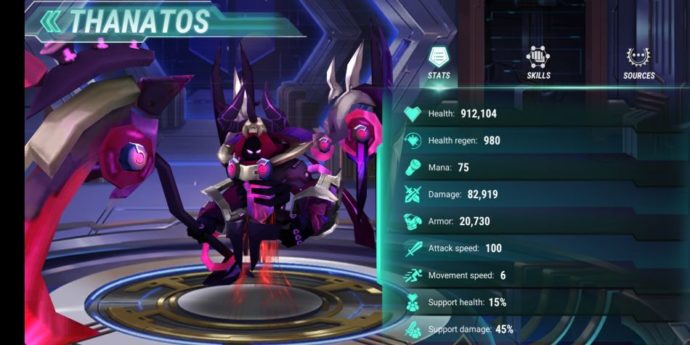 A strong, fierce-looking scythe wielder who does melee damage.

Reaper’s Hook: Pulls all enemies in front close to him.

Hell Land: Summons a dead zone from Hell to silence and curse all enemies standing on it.

Reaper’s Blade: Transforms into a machine scythe and cuts all enemies he touches. 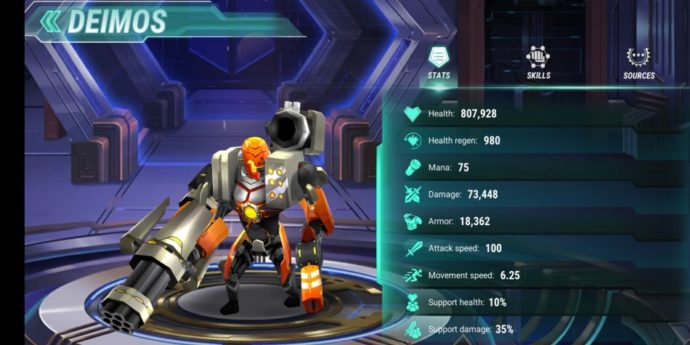 He wields a machine gun strong to deal with anyone he faces.

Into the Battle: Rolls forward healing himself and gains attack speed buff.

Burning Bullet: Rocks the earth with his gun, makes a huge explosion and burns all enemies in range.

Sky Rocket: Contacts his base, asks for help to destroy all enemies around him. 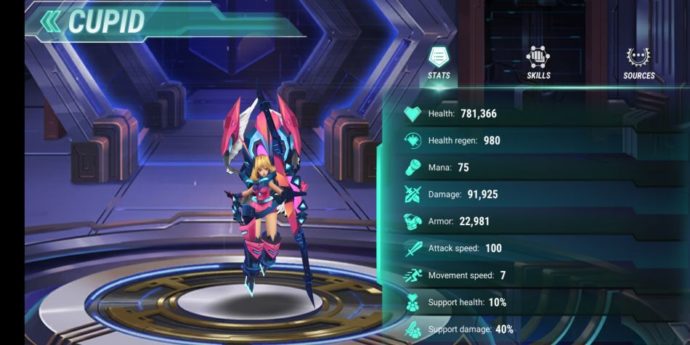 She’s a cute angel with four wings, but deadly.

Heart Shoot: Jumps back and releases a pink beam that pierces enemies in front.

Heart Rain: Rains with arrows from the sky, dealing damage to all enemies below.

Heart Beat: Her arrow can make a very large Beat if it touches an enemy. 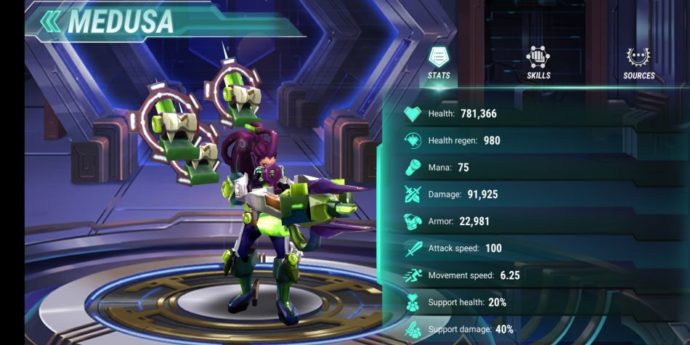 The deadly and famous lady with snakes for hair, but here 10x deadlier.

Piercing Arrow: Charges and releases a powerful arrow to deal damage to all enemies in front.

Medu’ Eyes: She opens her eyes and roots and silences all enemies in sight.

Giant Bite: A big snake can swallow it all. 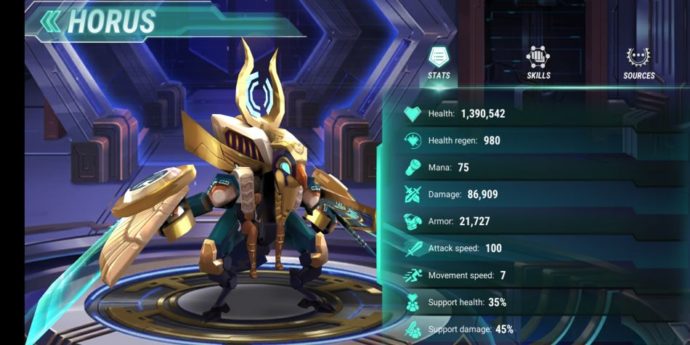 He’s a man-bird-bot with a charming personality (if you like birds).

The Sharp Wings: Dashes forward and damages all enemies in front.

Horus’ Tornado: Spins around with a very high speed, turning into a tornado and dealing damage to all enemies in range.

Energy Pull: Throws a device ahead to deal continuous damage to all enemies in range. 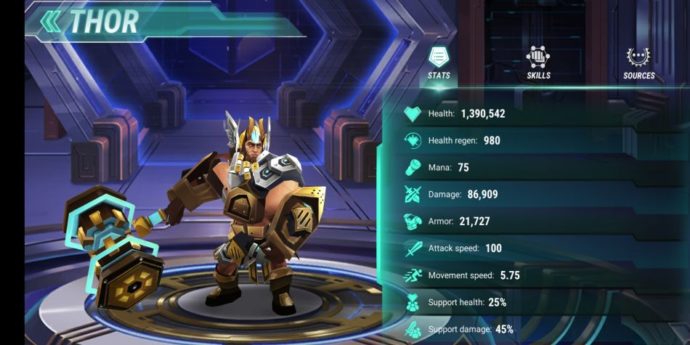 The mighty warrior wielding the famous hammer who destroys everything.

Flying Hammer: Throws his powerful hammer to deal damage and stun the enemies.

Thunder Clap: Pulls all enemies around him close to him and shocks them.

Thunder Storm: Swings his hand continuously to make a rain of hammers that deals damage to all enemies in range. 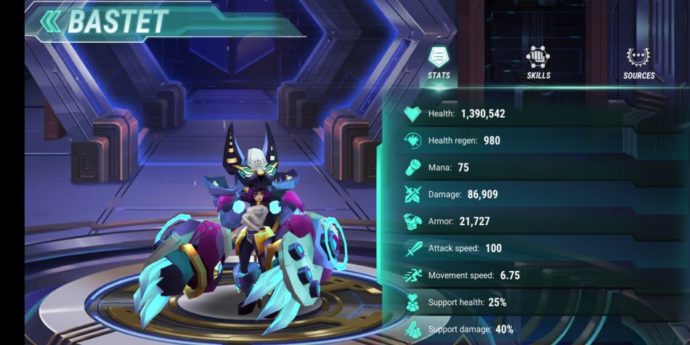 A cute and relatively tiny mecha with sharp claws, like a cat.

Moon Dash: Dashes forward, deals damage to enemies in a line and ends the attack with a powerful slash.

Moon Slash: She disappears, roots all enemies in range and massive damage continuously. 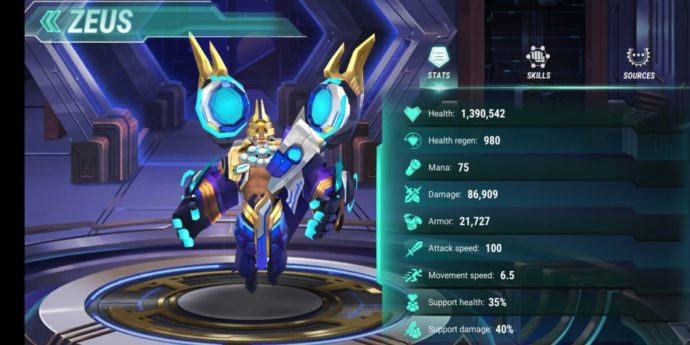 The god of the gods, a mighty thunder lord that literally shocks the enemies.

Mega Storm: Charges up and releases a thunder storm moving forward. The storm will damage and silence all enemies in range.

Zeus’s Wrath: He becomes invincible, flies around the battle and strikes all enemies with thunders. 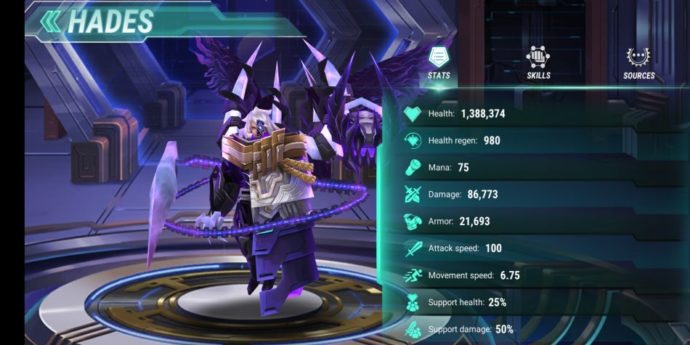 Easy the best looking hero in the game, also the God of the Underworld.

Dark Jump: Teleports to another location and damages and stuns all enemies on that location.

Dark Hand: Punches down on the ground, summons a dark hand from Hell that damages and stuns all enemies in range.

Cerberus: Summons Cerberus to aid him in battle. 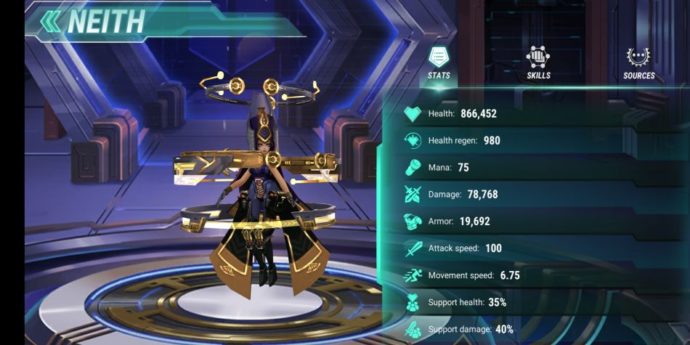 She’s the newest character, but a very powerful one.

Spinning Dagger: She throws her dagger and poisons all enemies hit by it.

Machine Dagger: Releases her super machine dagger to poison all enemies in range.

Mortal Soul: She becomes a mummy, flying around and damaging all enemies in range, poisoning them. 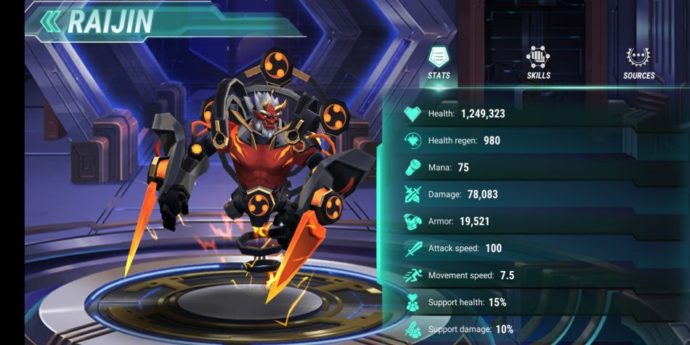 A titan made to withstand massive damage, but also have his part dealing damage.

Black Hole: Releases a black hole in front of him that pulls the enemies in and deals constant damage.

Lightning Whip: Shocks all enemies in front of him, leaving him and the opponents unable to move. 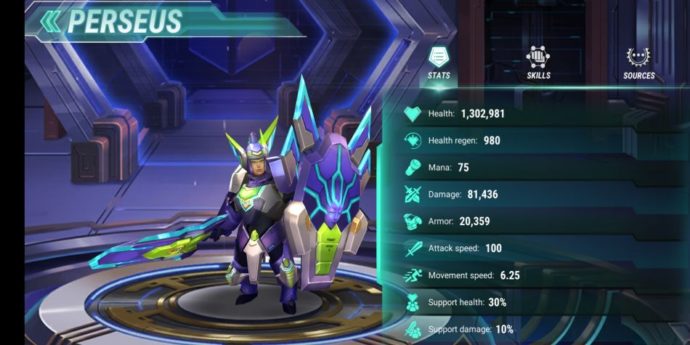 The more human-looking character, wields a massive sword and shield.

Space Cut: Cuts through the space leaving an unstable space that explodes after a few seconds.

Space Shield: Charges up and pushes back all enemies around, while also shielding his team members.

Space Power: Releases the power from his armor, stunning all enemies around him and gaining a huge shield. 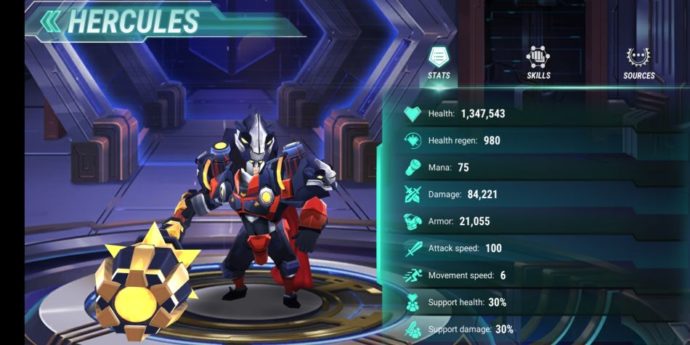 The mighty warrior swinging a mace and tanking for days.

Justice Hammer: Hercules slams his hammer, making a crack in the ground that explodes.

BIG Slam: He makes a huge earthquake in front. 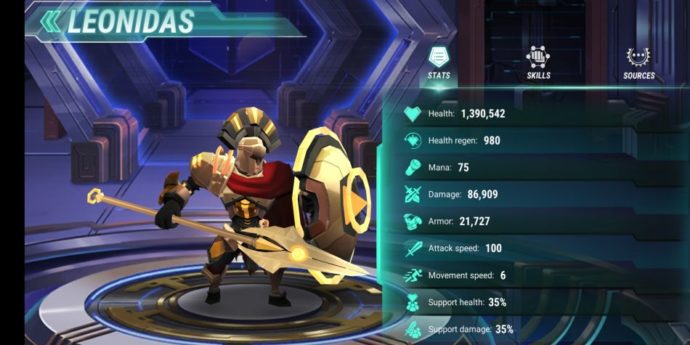 A powerful titan with a shield and a spear to protect and tank for his team.

Earth Shock: Slams his shield to the ground to damage all surrounding enemies.

Sparta’s Armor: Boosts his team’s armor and damages enemies around him.

Sparta’s Spear: Swings his hand to deal damage continuously to enemies in front and heal from the last hit. 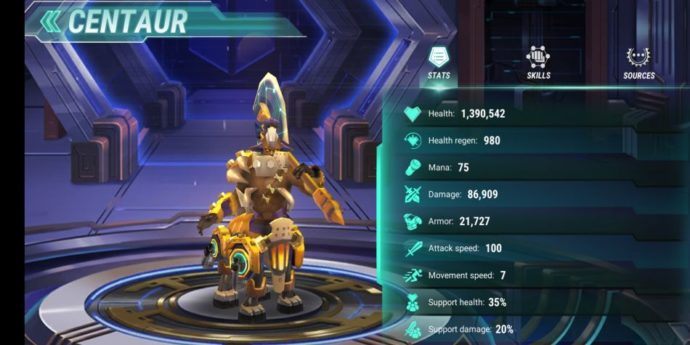 A mythical creature in the form of a powerful tank-bot.

Heavy Slam: Leaps ahead and damages all enemies upon landing.

The Protection of Nature: Gains a powerful shield.

Centaur’s Fury: Continuously damages the enemies in an area by trampling them. 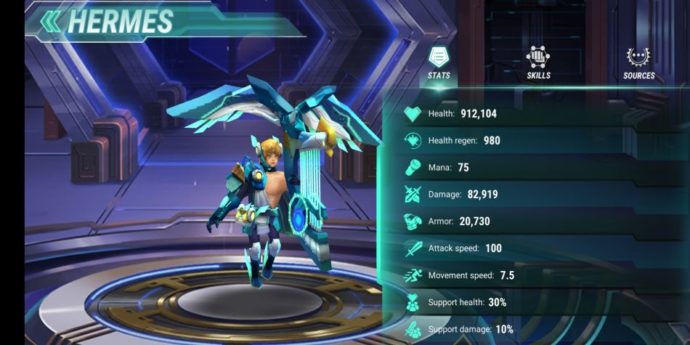 A little cherub-like machine with a harp, aiding you in battle.

Miracle Zone: Creates an area that heals nearby allies and decreases enemies’ armor.

Hermes’s Voice: He charges and releases a sonic wave that damages all enemies in front. 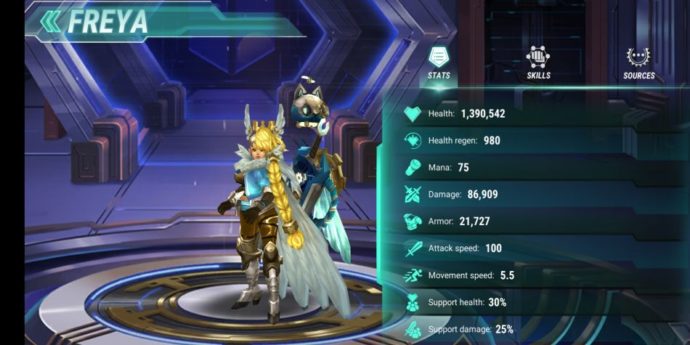 A cute girl character hero to support you anywhere you go.

Frost Slash: An ice skill that slashes enemies in a straight line.

Frost Breath: Heals and removes all debuffs from her team.

Snow Storm: She commands her robot to release an Ice-Core that deals damage to all enemies in range and has a high chance of freezing them.

*do not recommend playing as Support main character, because it is harder to deal with enemies end-game. It’s best and easiest if you pick an Offensive hero.

These are all the characters in Eternity Legends at the moment, but if anything new comes up we will keep you updated! And don’t forget to check out our Eternity Legends tips and cheats to get some extra tricks up your sleeve when you adventure into the campaign! 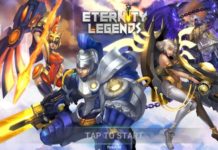