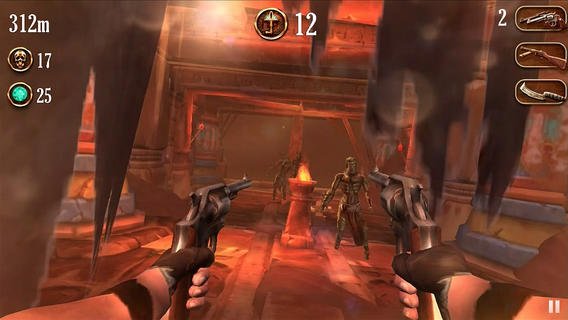 Ancient Egypt provides the backdrop for Escape from Doom, but this is not the Egypt of history books. Instead, the makers have turned to classic horror movies and novels for their inspiration and populated the land with terrifying mummies, awoken from their eternal slumber by a thoughtless and greedy archaeologist.  The game adds a new twist on the endless runner genre by bringing first-person shooter elements into the mix and while it is an innovative addition, other issues unfortunately render Escape from Doom less exciting than the premise would otherwise suggest.

The game starts promisingly enough, throwing the player straight into the action as they emerge from the ruins of a plundered tomb only to be faced with hordes of vengeful mummies out for blood. Initially unarmed, the player must manoeuvre between the mummies, while keeping a watchful eye out for sacred urns, in which can be found keys to unlock the treasure chests that are also dotted around the desert. The chests hold valuable weapons such as pistols, shotguns and crossbows which will make your escape that much easier, allowing you to send the foul guardians back to their tombs, while simultaneously racking up the bonus points. Just to make things more challenging, ruined statues and obelisks litter the landscape, while sandstorms can spring up from nowhere, reducing visibility and making a close encounter with a mummy much more likely. Run far enough and tombs can also be entered, creating a more claustrophobic experience requiring even quicker reactions.

Now, while all this sounds like a thrilling adventure, full of action and danger, a number of unfortunate flaws let the game down. First of these are the controls. The default setting requires the player to hold down on the screen to move left and right and tap the centre to fire, but this is simply not sensitive enough and subsequently movement feels sluggish and unresponsive where it should be exhilarating and fluid. Matters are improved by switching to tilt controls but it still feels as if the player is driving a heavy truck rather than an agile archaeologist and this makes avoiding mummies all the more frustrating, especially when they are grouped together in sandstorms or in temples.

Furthermore, collision detection feels less than precise, with the player able to move through solid obstacles at will, seemingly with no penalty, while mummies often land blows when the player is apparently at a safe distance. The inclusion of shooting is a big selling point for the developers, but as this is limited to simply firing directly forward, with no potential for aiming, its impact on the game’s entertainment value is fairly minimal. Some of these considerations might be ignored if the fundamental gameplay was enjoyable, and although it is amusing for a short time, the lack of variation to be found here soon becomes apparent, with flat levels that simply aren’t that exciting to play.

On the plus side, the graphics are atmospheric, with a muted colour scheme creating a haunting feel and some unsettling designs for the mummies and other enemies, although again there is little variety in the environments. The title music is distinctive and appropriately mysterious, with in-game effects including a constant howling wind and some genuinely unsettling screams which add much to the mood. There are also a number of achievements to be unlocked, adding to the game’s longevity and challenge, and which should take even hardened players some time to complete. Unfortunately, all this is not enough to lift the game out of the realms of mediocrity. With its clumsy controls, repetitive level design and less-than-exciting gameplay, this feels more like a chore than an adventure and is only really recommended for hardened fans of the endless runner genre.