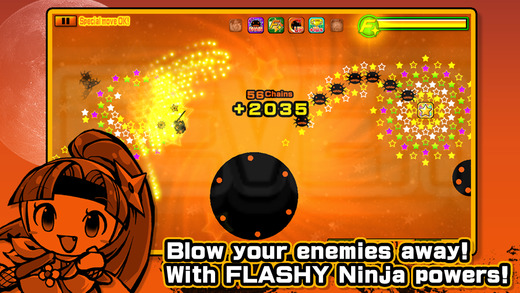 A new simple yet fun endless arcade game is now available on the App Store, a game where players will have to control ninjas to save their world from invaders from outer space.

Mr. Ninja!! Fever has been developed by Japanese team PONOS, the same team behind other successful mobile titles like The Battle Cats, the recently released puzzle game SolveThis + and the “Mr.” series. Mr. Ninja!! Fever is actually the latest entry of the Mr. series, vastly improving the gameplay experience of the original Mr. Ninja, released on the App Store back in 2011.

In Mr. Ninja!! Fever players will have to control their ninjas as they leap from one planet to another while cutting enemies and gather as many stars as possible. Not missing a target will allow players to increase their score multiplayer and get even more points. The game also includes several playable characters that can also be customized and improved with the right familiars,  a feature that adds an interesting level of depth.

With its anime inspired graphical style and easy to grasp gameplay experience, Mr. Ninja!! Fever seems to be the perfect game to play on the go. You can download the new game from Ponos for free on the App Store right now.