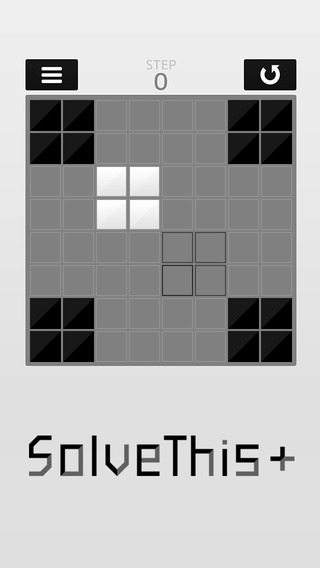 SolveThis+, a new puzzle game developed by Japanese team PONOS, is now available for download for free on the App Store, the team confirmed today with a new press release sent to TTP a few hours ago.

Unlike PONOS’ other mobile titles, including the over the top The Battle Cats, SolveThis+ sports a really minimalist graphical style that goes hand in hand with the simple mechanics employed by the game. Simple doesn’t mean bad, however. In SolveThis+ players will have to move around a shape made with white blocks and recreate the same shape in another aerea of the board. Things aren’t going to be simple though, as barriers made of black blocks will prevent players from moving the white blocks into specific areas.

What makes SolveThis+ even more interesting is the fact that each puzzle is only going to be available for 24 hours. Once the day is over, a new puzzle will become available. This unique feature adds a really nice competitive element to the game, as SolveThis+ keeps track of the percentage of players who have managed to clear the current puzzle.

SolveThis+ is now available for download for free on the App Store. The game is a really nice puzzle game so make sure to try it out if you’re a fan of the genre.