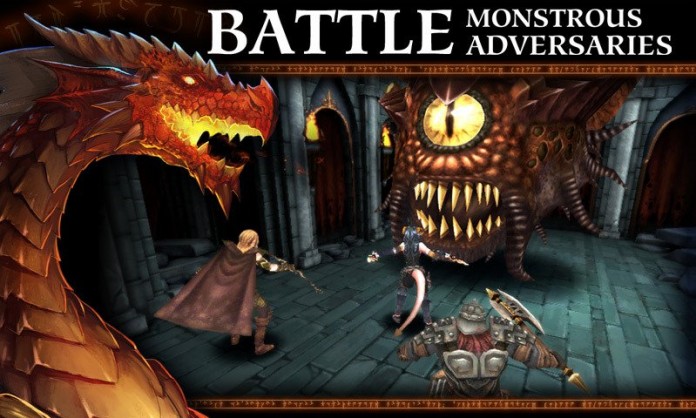 The fantasy legend that is Dungeons and Dragons finally arrives on mobile gaming platforms, in the form of Arena of War, a 3D battle RPG that is set in the famous Forgotten Realms.  Featuring the huge variety of character classes, weapons, spells and adversaries that the series is known for, Arena of War is a bold and intriguing experiment into the world of strategy RPGs, but unfortunately this is not the game that hardcore D&D fans have been waiting for, as it fails to provide many of the key factors which make the world so appealing.

The background for this adventure is The Sundering, a tumultuous time of upheaval where heaven and earth themselves will be re-shaped by the gods. To restore balance, a brave champion must step forward and strike a blow for the forces of good, by exploring dingy sewers and ruined castles and defeating the myriad beasts that lurk within. The game begins with the player choosing their character from a wide selection of classes including the Cleric, the Ranger, the Bard and the Half-orc Barbarian, and which can each be customised to alter their appearance and basic equipment.

Once you have selected your character, it is time to venture out into and enter your first battle. Combat is conducted from a slightly angled overhead view and sees your character facing a number of enemies in a closed environment, in a series of waves of increasing difficulty, and with a boss battle to finish things off. Movement is simple enough and is conducted by angling your character towards your desired target, dragging away and then releasing to send your hero charging forwards. The further you drag, the further you will travel, so you need to ensure that your angle is correct so that you hit your target and that you give your character enough power to make sure he reaches the enemy. If a character doesn’t end up in contact, they will instead make use of any ranged weapons or magic they might possess. 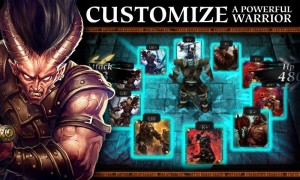 As you progress through your quests, experience points will be gained, and extra weapons and abilities unlocked to help you defeat the stronger enemies that you will now start to face. These can be upgraded by careful use of scrolls which you receive for defeating enemies, while the expected special moves, potions and other assorted items also make an appearance. Combat is enlivened by the presence of environmental factors, such as bombs, walls, and pits spitting poison or spurting fire. Enemies can be knocked into these objects to increase the amount of damage dealt, and their inclusion adds an element of strategy to your movement to ensure that you do not find yourself on the receiving end of their effects.

Sadly, while on paper this might all sound that it makes for a great game, the truth is somewhat different. The peculiar gameplay mechanic where you fling your character across the room, only to watch them bounce of the walls, makes the game feel more like Angry Birds than D&D. The dungeons themselves are also woefully small, and there is nothing of the exploration which fans have become accustomed to, simply level after level of very repetitive combat with a great deal of grinding. Furthermore, the story presented here is almost non-existent and simply resorts to standard fantasy clichés which, given the rich and detailed history of D&D, is unforgiveable.

Graphics are reasonable but not spectacular, with characters and enemies rendered in good, if slightly angular, detail, while special moves, environmental effects and spells are given suitably impressive visuals. Other plus points are the wide range of classes to choose from and enemies to be faced and the evocative music, but whether you find much enjoyment in the game depends very much on your expectations and knowledge of D&D. Dedicated followers will find this extremely disappointing, ignoring as it does the elements which make the series justifiably famous, such as exploration, character creation, narrative and statistics. For such fans it will instead come across as a cash-in and a wasted opportunity. For those without such preconceptions however, this is an agreeable enough fantasy combat game, albeit one that lacks depth and variety.