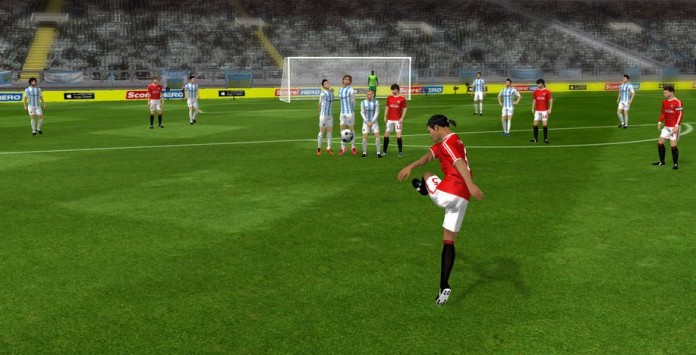 Dream League Soccer is a surprisingly high quality entry in the football simulation genre (or soccer if you live in the US), competing easily with the big names like FIFA.

Fast paced, with great graphics and a lot of depth, this is a game that will surely keep you hooked for a long time, challenging you to progress up through the leagues and become the best club in the world.

And I am here to help make that transition as quick and nice as possible by sharing with you some Dream League Soccer cheats and tips in a complete walkthrough to help you build the ultimate team and win all your matches!

So let’s not waste a single second here and let’s check out Touch, Tap, Play’s Dream League Soccer tips and cheats below!

One of the most important thing in Dream League Soccer, just like in any other football simulation game out there is to master the controls and be able to take a good pass, a good cross or a good shot.

The control scheme in Dream League Soccer seems to be extremely difficult to master, with shooting and aiming requiring quite a bit of practice.

Make sure that you get all that practice as soon as possible, by playing as many matches as you can and always trying to improve. Even if you have way better players, you will still get bad results if you can’t shoot or pass the ball!

The best way to really learn how to play is by playing against other human opponents. You can play against friends if they are nearby or against strangers online – it doesn’t really matter who you play against, as long as you play as many multiplayer games as possible, as that is where you will really learn to play and especially learn some moves from your opponents.

I was enraged at first. Multiplayer games were complete losses for me at huge scores, while I barely managed to win by one goal in single player games.

But you have to keep on playing, giving it your best and eventually you will learn the controls and what works better than anything else.

But until then, prepare to lose quite a bit – it will become a lot more fun afterwards, when you know what you’re doing, trust me!

Try not to sell any of your players for a while – keep a large squad in order to be able to swap players that get tired, but at the same time sign better and better players for your team.

It’s all about their ratings and not their name, so just look for high quality players that come as cheap as possible.

I know you would love to have the big names out there in your squad, but having quality players is all that matters. So set the lowest prices first and see what you can find for that money, them move up if there’s nothing good. Only look at the player stats, and never at their name!

I would suggest to start by signing a solid forward first, because you will need a lethal player in the final third, then depending on how your squad plays, sign another great forward or a great midfielder.

Remember that faster players are better than slower ones, so always consider speed a must have attribute for all your players.

Later on, when you have a decently sized squad, you can start selling your low quality players and get better ones instead. Rinse and repeat until you build that dream team you have always wanted.

Slightly more offensive tactics work best in the game – I had great success with 4-3-3, but also the classic 4-4-2 works well.

Always go with the attacking mentality and you can drop down to moderate when playing online matches. This game doesn’t want to deliver a lifelike experience and a completely real simulation of a football match, so offense is the best defense here. Plus it’s more fun!

Once you have a pretty solid setup of players, go into the Player Development section and start training them, improving their stats.

One session costs 50 coins, which is pretty much, but if you upgrade your existing stars and make them even better, it will be worth all the money you spend and you won’t have to transfer in many other players.

So don’t forget about this option, it’s extremely important to train your players once you’ve established your team – and always work on your top players first, because these are the players you won’t be selling anytime soon!

It’s really difficult to score directly from a set piece (or at least I suck at it, but believe me, I have tried a lot!).

However, there’s a nice tip I have for you and it’s definitely worth trying out. This works best when you’re taking a free kick that’s on either side of the field and it helped me bag a ton of goals over time.

Instead of trying your luck at shooting and trying to score, pass instead to the forward that’s in the best position: you’ll usually have one player near the penalty kick spot waiting for a good pass.

Master this and you will be scoring a lot more from your free kicks!

8. Keep an eye on your players’ energy!

The energy is extremely important for your players, as they will always perform better when the meters are full.

In order to keep their energy levels as high as possible, don’t forget to take advantage of using all the substitutions in every game and also make sure to rotate players: when you have easier games ahead, give your stars a chance to rest!

Nobody likes to waste their time watching ads, but this is something I recommend you to do after each match, in order to get some extra coins. These are extremely helpful in the long run and they’re cheaper than having to pay for them with real money!

These would be, for now, our Dream League Soccer tips and tricks. Do you have anything else to add? Let us know by leaving a comment below!

Update note: This article was initially published back in 2016, but it has been updated in 2019 to reflect the latest changes in the game.