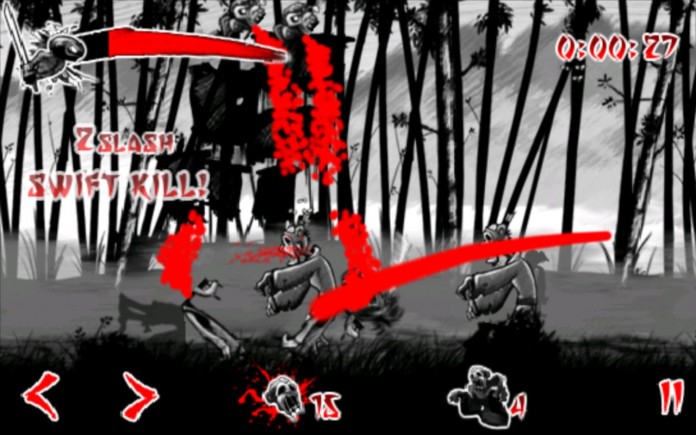 Among the mobile games released on iOS, Fruit Ninja is probably one of the most popular due to his simple yet engaging gameplay experience. Play it for a long time and you really may start feeling like you can slice anything with just your finger. Over the years a lot of other titles have tried to take the simple formula of Fruit Ninja and give it a new and interesting spin. This is what Draw Slasher, originally released on PlayStation Vita, has tried to do. The end results aren’t as good as Fruit Ninja, but it’s still a quite enjoyable experience.

In Draw Slasher you will be taking control of a ninja who has to journey through a series of diverse stages while cutting and slashing zombies and several other undead creatures. There’s actually a lot of variety in the enemies, as some of them are only vulnerable against well placed slashes. Others will attack you from above, forcing you to place greater care on how to deal with them. No matter the enemy, slashing must always be done in an accurate way, as the length of your slashes will be determined by the amount of stamina you possess at the moment. It’s really important to conserve as much stamina as possible since more slashes will equal to combo bonuses.

As much as the gameplay experience is hectic and fast paced, everything doesn’t quite work as good as it might have been. Controls are not too precise, making you miss even though you might have made a seemigly perfect slash. It doesn’t happen too often, but it does, putting a premature end to your combos or even to your virtual life.

It’s a shame because Draw Slasher has enough variety in its gameplay that perfect controls would have made the game an absolute must have. The hectic slashing sequences are interrupted by some platforming sections that add more variety to the whole experience. A special magic system will also allow you to unlock more special abilities, adding even more variety to the game.

Draw Slasher is an interesting combination between a platform game and slasher Fruit Ninja like experience. The game is quite fun and fast paced but controls do get in the way sometimes, ending up damaging the experience. In a game where each slash counts, it’s really frustrating to miss one due to the controls.