That’s exactly what developer Playwith has attempted with Dragon Raja. If you’ve ever played one of these mobile multiplayer action RPGs before you’ll know exactly what to expect. But you may not have played one that looks this good.

If you’re wondering why you’ve already heard the name Dragon Raja somewhere, that might be because it’s a popular fantasy book series in Korea. Also, the game is already a hit in Taiwan and its native Korea.

It starts you off with the protagonist from the books, Hutch Nedval. Armed with a giant sword, you have to venture out into battle and destroy a few waves of fantasy enemies, before killing a boss. Each battle lasts between one and two minutes, and there are plenty of them – over 300 in all, organised into Normal, Elite, and Hell difficulty levels. 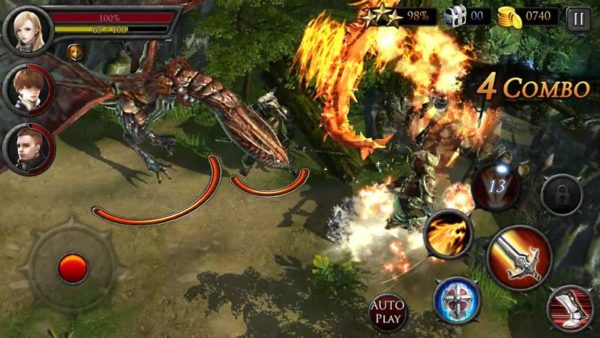 You move with a virtual stick on the left, and fight with an array of buttons on the right. There’s ‘attack’, ‘block, and ‘dodge’, along with three special moves (one of which is locked initially).

Pretty soon you’ll start adding heroes to your roster, each of which has his or her own strengths, weakness, and abilities. There are 20 in all.

You can take three heroes into battle, and you get to choose these from your roster at the beginning of each round. In contrast with many of Dragon Raja’s genre stablemates, you can swap between heroes as many times as you like during battle, though you get a temporary boost when switching to a character if you leave them idle long enough.

Combat in Dragon Raja is fairly slick, and once you master the dodge and block skills it becomes gratifying to see how cleanly you can finish a stage. If you don’t much enjoy hacking and slashing, however, you can set the battles to play out automatically, letting the highly competent AI gather loot and kill baddies on your behalf. 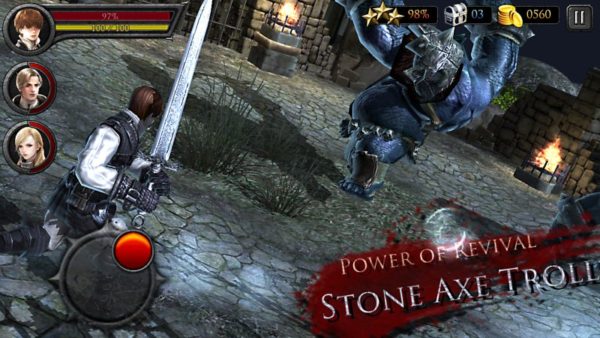 Of course, the story campaign is only one element of Dragon Raja – just one of many icons on the sprawling, gorgeous menu screen. Once you reach level 15 you’ll start to unlock some of the additional areas

These include, Lenus Arena, where you battle human opponents, Altar of Dimensions, where you roll a die to win stuff, and the Great Labyrinth, a level-based dungeon where you explore and kill monsters in random encounters.

Later, when you’ve climbed even higher up the level ladder, you’ll unlock still more areas, including the all-important Guild, and there are several zones still waiting to be added to the game.

Clearing campaign stages, rolling die, battling through the Great Labyrinth, and even logging in each day give you rewards in the form of gold, gems, XP, and so on. There are also quests to finish and achievements to earn.

A large part of the game involves spending this bounty on your heroes, levelling them up in numerous ways and enhancing the skills and equipment of up to 20 different characters so that they’re ready to face battle and earn you even more sweet loot.

While there’s plenty in here to keep attentive RPG fanatics entertained, it’s fair to say that you can just breeze through if you want, blindly tapping on anything with a red sticker. This strategy might fail eventually, but we certainly didn’t reach that point.

None of what we’ve described will surprise fans of the genre. Dragon Raja is a solid, well-balanced, entertaining mobile multiplayer action-RPG, but in terms of gameplay it doesn’t really bring anything new to the genre.

However, what it does bring is a whole lot of polish and charm. The graphics are impressively crisp and smooth, and festooned with little details and flourishes, while the orchestral soundtrack wouldn’t be out of place in a film.

The dialogue is also excellent. The banter that the heroes exchange between battles is spiky and full of humour, and while we did encounter some spotty localisation, for the most part the narrative side of Dragon Raja raised the tone of the whole game considerably.

You can download Dragon Raja on the App Store [link] and Google Play [link] now.