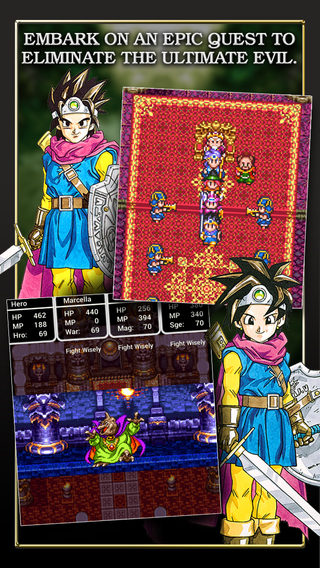 Like all the older entries of the series, Dragon Quest III has been ported on a variety of consoles during the years. The SNES and GameBoy Color ports added new content to the game as well as  featuring improved graphics and sounds. The iOS release of Dragon Quest III is actually based on the Japanese mobile port released a few years ago, which featured even better graphics but also less content that the GameBoy Color version. Even without this extra content, however, Dragon Quest III iOS is definitely one of the best versions of the game and one of the best iOS ports of the series.

The Dragon Quest III plot isn’t all that different from the previous two entries of the series. Players will take control of a young hero who sets out on a journey to seek and destroy the Archfiend Baramos, who has killed the hero’s father prior to the game’s beginning. Unlike other games of the series, Dragon Quest III doesn’t feature named party members but only generic characters that can be recruited in taverns, a design choice that obviously limits party interaction. Thankfully, the rather standard plot is improved by the many characters players will meet during their journey and the many of references to the events of the two games, which make Dragon Quest III’s world feel more alive.

While the Dragon Quest III’s story is nothing to write home about, some of the game’s new mechanics are way more remarkable. All of the generic party members come with different jobs, which bestow them different abilities. After a certain point in the game, it’s possible to change their class while retaining all the benefits of the previous one, a gameplay mechanic that makes Dragon Quest III a much better game than its predecessors.

The job system isn’t the only new mechanic included in the game. The inclusion of the bag system makes item management more smoother than before and the day/night cycle adds more depth to exploration. Even the battle system has received some noticeable improvements, with more buff and debuff spells adding more complexity and strategic options.

As stated earlier in the review, Dragon Quest III iOS is based on the Japanese mobile port released a few years ago. This means that the port lacks the extra dungeon added in the GameBoy Color version of the game as well as other content like  the opening cutscene featuring Ortega, the hero’s father, the dice game and monsters animations during battles. Even though it meant that some content had to be left out, basing Dragon Quest III iOS on this version of the game has been a good choice, in my opinion, since the game looks stunning and doesn’t suffer from the stretched pixels issues of the ports of the previous two games. The soundtrack has also benefited from this decision, with the orchestral pieces and 8-bit sound effects sounding incredibly good.