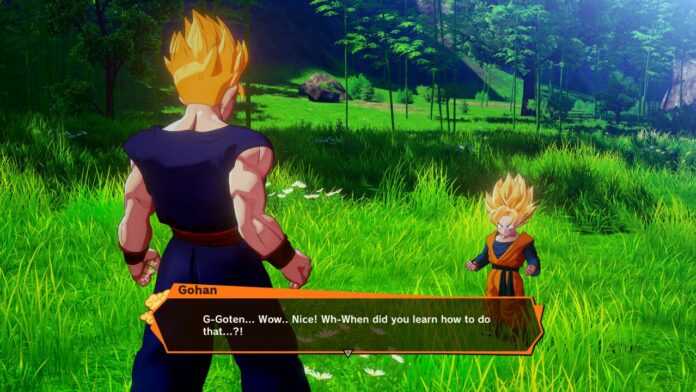 After defeating Cell at the end of the Cell Saga in Dragon Ball Z: Kakarot, the world is finally at peace. This, however, doesn’t mean that the battles are over, as a more menacing enemy is on the horizon, only that Gohan and the other Z Warriors have no idea of what’s coming to them.

Having been forced to take part in the new World Tournament, Gohan resumes his training with the help of his little brother Goten. Here’s how to defeat him with ease.

How to Defeat Goten in Dragon Ball Z: Kakarot

Goten is the first boss you will have to fight in the Buu Saga in Dragon Ball Z: Kakarot, and he is a considerably easier opponent to take down than Cell.

Outside of the regular combo attacks and the charged red aura attack that can stagger you if not blocked or dodged, Goten can only use one special attack called, surprise surprise, Goten Attack. This attack is a simple charging attack that can dodged easily and blocked even more easily. Given that Goten has tons of HP, far more than expected, you will have to keep damage to a minimum, so it’s far better to block the attack and retaliate with a Vanish Attack if you have enough Ki, to stay on the safe side.

Like most bosses, Goten can break combos easily, so don’t overextend your combos: use a few regular combo attacks, unleash special attacks that can stun the young Saiyan to break him, and he will soon be defeated.