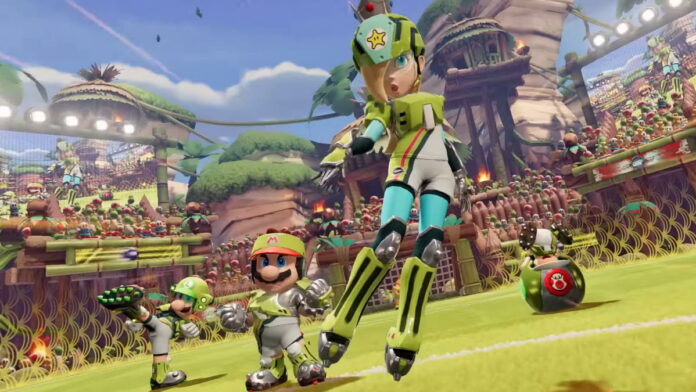 Mario Strikers: Battle League is finally here on the Nintendo Switch! Players can duke it out in frantic and heated soccer battles through offline and online matches. If you’re the best out of your own friend group, why not take it online? For lots of sports games, communication is important to the flow of the match, so today we’ll be answering the question: does Mario Strikers: Battle League have voice or quick chat?

Mario Strikers: Battle League can be played online with random players or friends. Upon choosing Quick Battle, you can select to play offline through local wireless or online. Selecting online will pair you up with another player if you wish, and then you’ll be matched with random players.

From there, the match will play out as normal. Unfortunately, as of the game’s launch, there seems to be no communication options for online play. The game doesn’t support voice chat, and there are no quick chat/shoutout options for your teammates either. As it stands, there is no way to talk to your teammates or opponents without the usage of an external program, like Discord.

Most of you will be using Discord anyway since everyone uses it nowadays, but for the select few who prefer to use direct console voice chat, this is a bit of a let-down. However, there is some hope, as Nintendo and Next Level Games have already announced free updates later down the line.

Related | How to Play with Friends in Mario Strikers Battle League

Next Level Games have already confirmed that new characters will be added to the initial roster of ten, among other updates. Hopefully one of the updates will include an option for voice chat, though it remains unlikely considering that there are only a few games utilizing the mobile phone Nintendo Switch Online app for voice chat.

At the very least, we hope that the game receives quick chat options that can be easily accessed, something akin to the shout-outs in Splatoon 2 or Rocket League. We imagine being able to quickly use phrases like “pass the ball” or “shoot here/now” would making coordinating plays with randoms online a lot easier!