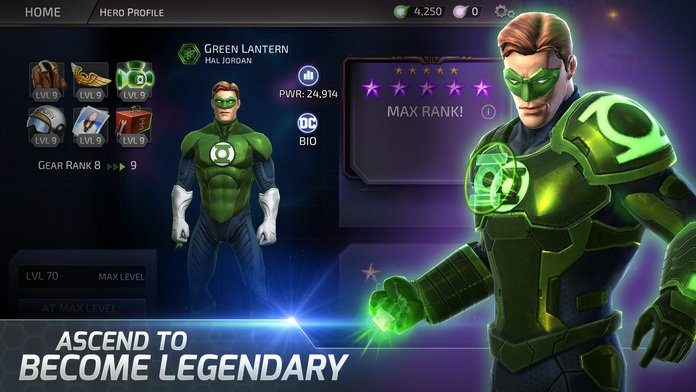 DC Legends has just been launched on the App Store, with an Android version being expected soon. We have already shared with you some tips and tricks for the game, as well as a guide on how to unlock heroes faster, but now it’s time to see which heroes are actually better than the others and how an ideal team would look like. So in this article, we’re going to check out the best heroes in DC Legends, as well as the best team setup in the game.

Before we get there, I should point out a few hopefully obvious things: at the moment of writing this article, there are 40 heroes that you can unlock and some of them are random drops. This means that you might or might not have some heroes, depending on the progress you’ve made in DC Legends. Also, some of your Heroes might be greatly leveled up and upgraded, which might make them in turn (slightly) better than ones I consider the best.

Second, it is extremely important to know that an ideal team setup does not exist per se, because the element bonuses come into play. This means that an extremely powerful character might not be that good when facing a specific team setup, while a weaker character might become better when facing the right team. However, with all these in mind, there are definitely better heroes than others and that’s what we’re going to talk about today, as well as how to build a team that will rule the PvP arenas and what heroes to focus on for the future.

First of all, before anything else, you should know that heroes with a Leader skill are instant good choices in most occasions because of the buffs and bonuses they offer to their teammates. So as soon as you get one, make sure to place them in your team and use them as team leaders. However, it might take a while before you get there since constant upgrades are needed in most cases in order to unlock the leader abilities of your heroes.

These being said, we’ll start with the best team setup. Since at the moment of writing the article, the game has just been launched and most players can be considered beginners, here is the best team setup, in my opinion, for the early stages of the game, based on heroes that I saw that most of the people already have:

I consider this team extremely solid, with Zatanna delivering much needed healing and Flash delivering fast blows one after another. Wonder Woman is great for boosting her teammates and dealing damage to multiple targets, just like Sinestro who is a bit slow though.

Now let’s check out which are the best DC Legends heroes. We’ll group them based on their element, so it’s easier to pick up the right ones for your team depending on the opponent you’re facing:

Harley Quinn (Quite Vexing): her Distract and Destroy skill is really good as she gets an assist from teammate and reduces her opponent’s Agility. Love/Hate is also good and unlocked by default since it deals a guaranteed critical.
Green Arrow (Castaway): Not really the best hero, but a good choice thanks to his trick shot which makes him invisible, therefore invulnerable, combined with the buff-removing Cover Shot. Once you unlock Multishot and Quickness, things get even better with extra potential damage and reducing the turn meter.
Joker (The Clown Prince of Crime): All his stats are great, one of the better Red characters in my opinion.
Batman (The Dark Knight): Great skills, from first to last. You will love Full Armor Beatdown (more damage to Taunting enemies), as well as Concussion Grenade which reduces the strength of the entire enemy team.
Joker (Damaged Goods): Another great overall Hero, with amazing skills, including the Passive and Leader Skill. His third skill might be a miss on some occasions, but the others totally make up for it!

Zatanna (Mistress of Magic): You need a healer on your team and she’s a great choice that most players already have!
Sinestro (White Lantern): Even better if you have him, as his healing and overall stats are way batter than Zatanna’s
Black Adam (Khem-Adam): Great overall damage-dealing hero. His Passive Skill (extra turn meter) and Khandaq Storm (Heavy Damage, Buff removal & Cooldown reduction) are great to have in battle!
Solomon Grundy (Born on a Monday): A great wildcard, he could prove pretty useless in some battles, but if the enemy targets him constantly, he can provide pleasant surprises thanks to his Passive skills (extra agility and chance to revive)

Flash: I consider him one of the best heroes in the game actually because he is so fast and can attack extremely often, plus he has the chance to attack twice.
Bizarro (No. 1): Good for dealing damage. Combine taunt and his passive ability to auto-heal and you have a winner here!
Mirror Master (Roguish Reflection): A strange choice, considered by many, but I like him. He can apply invisibility on one of your Heroes, meaning that he might actually save them from being killed. His passive abilities, when combined in longer-lasting battles can really make a difference!
Lex Luthor (Survival Support Suit): One of the best heroes in the game in my opinion. Not only that he can boost the speed of all your heroes, but if you have him as a team leader you have a 50% for auto-heal on team if they are buffed.

So these would be the best Heroes in DC Legends, as well as a solid team suggestions for the beginning of the game. For later stages, just pick and match the best heroes from the list above and you’ll be unbeatable!

But what’s your opinion? Which are the best superheroes in DC Legends and how would you like your ideal team to look like?