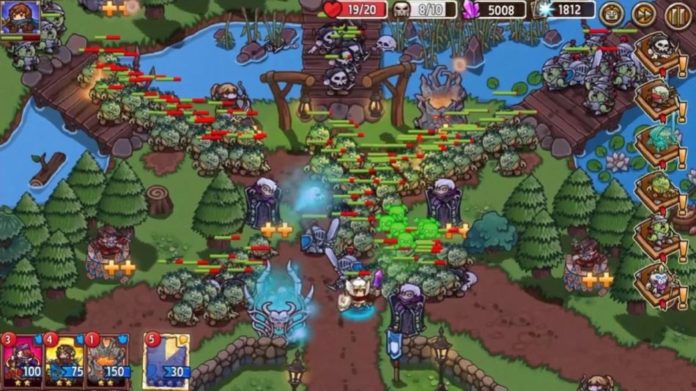 In today’s article we are going to cover the best towers in Crazy Defense Heroes, and help you get a better understanding on which towers you should actually invest in, to help you in the end game and to also have fun while doing it!

We are going to start the article with the most basic thing of all, and that is explaining what the towers are and what other types of units there are in the game. If you want to really dig into the details about each tower, then we will cover that too by explaining what their skills do and much more.

So, are you ready? Then let’s dive right into the Crazy Defense Heroes Towers guide!

Crazy Defense Heroes – What are Towers?

Towers are one of the types of cards you will get in game, alongside Skills, Items and Heroes. The Towers are by far the most important of them, because they basically allow you to pass the stages and defeat tons and tons of monsters.

You can never progress in Campaign Mode if you don’t have decent Towers, so you can imagine that they are extremely important. All of the towers have a set range, and depending on that they can cover more or less ground with their attacks.

All of the towers can be upgraded, and this will be symbolized with a yellow “+” symbol next to them once placed in the designated space. The upgrades are unique for each tower, and are usually typical to the type of tower it is (for example a Poison Tower will boost the poison damage and decrease poison resistance).

Towers can also come in different rarities, from 1 star to 4 stars (Common, Rare, Epic, Legendary), with 4 stars being the strongest obviously.

Crazy Defense Heroes – What are the best Towers?

There are a total of 23 Towers currently in game (at the time of creating this article) and each one has different skills and attacks, as well as damage and Mana consumption. Since placing a tower down costs Mana (as well as upgrading it), you will need to take this into consideration too!

So here I’ve grouped them all according to how many targets they attack (Single Target and AoE), and we’ll share a complete Crazy Defense Heroes Towers tier list below!

– Javelin Tower: It is a great single target damage dealer, especially since both of the upgrades basically make the attacks more powerful. The Mana cost isn’t crazy, so I recommend using it. Deals Physical Attack Damage.

– Lightning Tower: It is one of the best end-game units, since it does both damage and has a stun (from being zapped by Lightning). The hits penetrate armor, so this unit is definitely amazing. Make all the upgrades you can, and when placed down upgrade Overcharge before Chain Lightning. Deals Magic Damage.

– Prism of the Sun: This unit will burn the strongest enemy in range, and it does a ton of damage. Since it is single target, it’s an amazing unit so definitely consider upgrading it. Deals Magic Damage.

– Sniper Tower: This is by far the best unit in game. It basically takes down enemies in one hit, while also having a huge range. So you can place this unit somewhere far behind, and because of the range it can reach pretty much anything.

On top of that, you can also further increase the range and damage, so it’s the best unit in my opinion. It depends a lot on where you place it, so make sure you consider well the place before you set it down. Deals Physical Attack Damage.

– Snowball Tower: This tower is both cute and powerful. It throws strong snowballs at the enemy (maybe even ice balls given how hard they hit) and it has decent range too. Get it because it is affordable and has good damage. Deals Physical Attack Damage.

– Bolas Tower: It’s definitely good, so if you get it you can upgrade it because it’s a very good damage dealer Tower card, especially for single target. Focus on upgrading Bola Mastery skill when you place it down (for increased damage). Deals Physical Attack Damage.

– Necromancer Tower: This unit is somewhere in the middle, between super amazing and meh. If you build around it, I believe that it can be super useful, since it basically will raise the defeated enemies to fight for you.

If you add a couple of powerful damage dealing towers, you can probably turn it into a S+ unit, but it all depends on how you choose to play. Deals Physical Attack Damage.

– Slowdown Tower: Again, it depends a lot on how you want to play, because this tower basically slows the enemies. If you want to add a strong AoE Tower to destroy them all at once, or even a powerful Spell to affect an area, this tower can help gather all the enemies in one place.

It also has Time Warp which is basically a teleport effect, and Astral Shackles which bound one enemy in one place, like a stun. Deals Magic Damage.

– Archer Tower: It could be good, if you need some more Poison towers to deal damage. They are pretty OK, especially since they are an early-game unit that you get.

Since I like Poison damage and I work a lot with it, I keep this unit with me but don’t rely on it all the time since the damage isn’t that amazing. Deals Physical Attack Damage.

– Dart Tower: It can be good for the Mana gained when killing, if you are struggling with that, but don’t make this your main Tower because it won’t provide that much Damage end game. Focus on upgrading both skills. Deals Physical Attack Damage.

– Illuminator Tower: It is a great unit for revealing hidden enemies. It also has great range, but the damage isn’t that great, so you will have to add some good damaging cards to make up for that if you want to use it. Deals Physical Attack Damage.

– Holy Tower: It deals increased damage to the Undead, but even so it’s not amazing damage. I don’t really suggest using it (Unless you got it 4 stars and it’s super powerful).

Now that we covered the single target best towers, it’s time to move on to the AoE ones, because these are super important as well, especially when you start encountering hordes of running enemies!

– Crossbow Tower: The best AoE Tower in game, both for early game and end game, because of the sheer damage they do. Depending on how you got them placed, normally I would suggest upgrading Barbed Bolts first, but if you need that extra range, go for the Master Blaster. It can’t be wrong either way! Deals Magic Damage.

– Gatling Tower: It is a powerful Tower which deals heavy AoE damage. It’s good, definitely get it and upgrade it! Even if the Mana cost is quite high, it’s definitely worth it. Deals Physical Attack Damage.

– Poison Tower: This unit is one of my favorites, but it depends a lot on how you play and how you plan your strategy. They should be placed strategically, and paired up with other non-poison units, because if you have them one next to the other, the poison will not stack unfortunately. Always upgrade Concentrated Venom first. Deals Damage over Time.

– Mortar Tower: It’s one of the best towers, but it’s difficult to play and land your hits correctly. Since the attacks can land on a lot of enemies, you could pair this with a good slow effect and even stun. Upgrade Rifled Barrels before anything else. Deals Physical Attack Damage.

– Pirate Tower: One amazing early game unit, which kinda lacks in the late-game department. Early on, it can be super powerful, because it’s just like the Mortar Tower, but with less damage. I consider it very good for the early game, but it depends a lot on how you play. Upgrade Black Powder Bombs first. Deals Physical Attack Damage.

– Well of Souls: This is a unit which basically improves in power, the more souls it gathers (from dead enemies).

It does both Physical and Magical damage, and it can be a good damaging unit, even if it’s not the cheapest. I suggest trying it out to see if it will synergize well with your team, because if it does, it can be super good.

– Lazy Tower: As the name suggests, it’s a tower which slows the enemies. Upgrade the Splash Zone first, then the Damage Booster, then Need for Speed. Depending on your team, it can be pretty good, but overall it’s just a… lazy tower. Deals Magic Damage.

– Storm Tower: It throws plasma at the enemy, but the damage is really not that good, and neither is the AoE. I don’t recommend using it. Deals Magic Damage.

– Volcano Tower: Similar to the Storm Tower, but dealing molten rock. It’s supposedly good against Minotaurs, but don’t rely on this because if you already have a good and upgraded unit, it’s not worth switching it our for this one. Deals Physical Attack Damage.

The upgrades I kept mentioning here refer mostly to the upgrades you make in game, after placing down the unit. Depending on the Tower, it can have multiple upgrades, which are all marked with a yellow “+”.

Whenever you gathered enough Mana (from killing enemies), the “+” will not be grayed out anymore and that means that upgrades are available. I mentioned for some of the units which upgrades are worth making first, and for the ones that I haven’t – it doesn’t matter that much.

Now the second type of upgrades, is the general card upgrades. You can do this by opening the “Cards” menu, then tapping on the card you want to upgrade and then on the right you will see a list of materials required to make the upgrade.

If you have all of the materials, pay the Gold it asks and the card is upgraded! You can gather materials for upgrades from the main interface -> “Scavenge”, from opening chests and from collecting Campaign Mode rewards!

Check out our Crazy Defense Heroes game guide to learn more about the game and how to get better at it, because you will find more info there than we mentioned here!

Thus being said, this is all we have about the Crazy Defense Heroes Towers guide! If you have some more useful info you would like to share with us, as well as some unique team formations and strategies, feel free to share them down in the comments below!