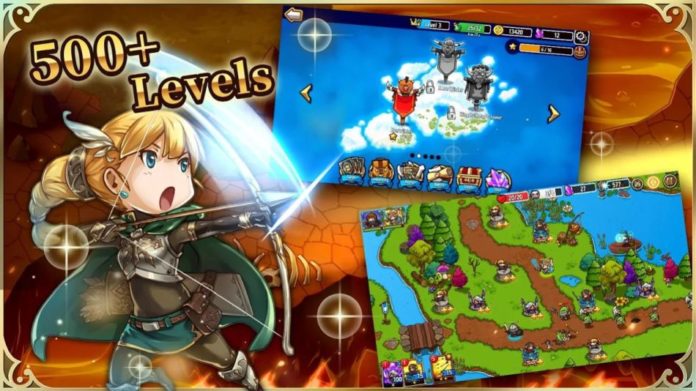 In today’s article we are going to share with you all of our Crazy Defense Heroes tips and cheats to help you pass all the stages and place your units in such a way that you will always win the encounters.

Crazy Defense Heroes is a strategy game through and through, in the sense that you really have to think things well beforehand, because else you might end up losing (well, not in the very first stages, but later on when it gets more and more difficult).

So, are you ready to learn all of our Crazy Defense Heroes tips and tricks? Well then, let’s not waste another second and dive right into them!

First things first: you need to learn the types of cards that you get, so that you know exactly what units you have and when it’s best to use them. There are a total of 4 types of cards in the game:

– Heroes (The actual heroes which fight on the battlefield)

– Towers (The structures which you place in the designated places on the battlefield – check out our complete Towers guide to learn more about them, and which are the best Towers in the game!)

– Spells (Cards with various spells which you cast yourself, so it’s not the heroes or towers who cast them)

All of these have different uses, and by now you probably learned that some of the most important ones are the towers, which you can place on the battlefield in the designed spaces.

The most important cards are the Towers, which basically allow you to pass the stages and defeat the monsters. You can pass stages without having endless heroes, spells and items, as long as the towers do the work – so they are extremely important!

It is super important that you place the cards with towers in the right position, because that can mean the win or loss of that certain game. As you can see when you tap on the certain tower, each one of them has a different range.

Always try to place the ones with a smaller range in an area where they can affect as much as possible, for example on the side of the road. The towers which have a big range (like the Sniper) can be placed even somewhere far behind, because if they are in range, they will still hit.

It depends a lot on how you choose to place them, so make sure you read below because I detailed on my preferred play style and that might give you a hand!

How I place my towers:

– I personally prefer to pair up a couple of good Poison Towers and put them at the beginning of the lane, so that the poison can take full effect since the very beginning. Towards the end of the lane I usually place Pirate Towers, but since I might not always have enough Mana for this, I don’t always place them right away (only once I gathered enough Mana).

– For now, the Poison Towers will be good and take down basically everything they come across in a matter of seconds (because the poison is AoE). In very tough situations, I also place the Sniper Tower usually next to crossroads and in areas where they can take over multiple lanes.

– If the level is super easy, or I just want some high damage dealing towers, I can also place the Archer Tower and upgrade it to deal Poison Arrows, and just stick with my poison play style.

In my opinion it works very well, and I don’t really see the need for any other types of cards, such as the spells and whatnot. Either way, just in case, I have a Lighting Tower card which I keep but place down only in emergency situations.

Upgrade the structures once you placed them

Once you place down a structure, it basically costs Mana, but once you kill monster units you gain back some of that Mana. The more you gain, the more you will see little yellow “+” signs next to the towers, which signify that you can upgrade them.

I suggest that you read well beforehand, because I can’t tell you exactly what to do and what not, since all of the towers have different skills. What I can tell you though, is that the upgrades are worth making.

I always upgrade the Poison Tower as much as I can, whenever possible – because it gives decreased Poison RES to the enemies and increases the Poison damage also. I also, always try to make all the upgrades possible to match the type of enemies I encounter, since they vary from stage to stage.

So in my opinion, you should definitely read before you upgrade, and when you want to make the upgrade, tap on the tower, then tap on the ability you want to upgrade (it will show you what it does), then tap again on it to confirm.

Watch an ad to claim a free chest!

You can claim a free chest containing a random rewards by simply watching a short ad! The ad can take up to 30 seconds, so it’s definitely worth spending the time to claim this chest!

You can find it in the main interface (so if you are in Campaign Mode you have to go back by tapping on the arrow in the top left corner), under the news and offers info. This chest can give you anything, from Gold to materials and even cards! Make sure you claim it every time you see it available!

When you want new units, open the Premium Battle Chests

If you want to buy new units, you can do so by saving up Gems and opening Premium Battle Chests. There are a few types of chests that you can get every day for free, so let’s list them all below:

– Daily Chest (you get one every day for free)

– Free Ad Chest (that we mentioned above)

You should always save your Gems for this, and not waste them on replenishing your energy for 50 Gems, because it’s not worth it. Always buy Premium Battle Chests to get a chance for more and better units!

Of course, next to these chests you can also claim chests from quests, but we’ll detail more about those below!

Save up your Energy!

The Energy is in the top side of the screen, next to the green bottle. Every 9 minutes, you will automatically restore 1 Energy point, which you can use in one or two ways:

– for Scavenging the completed stages.

If you find yourself in need of Gold or Materials to pass the stages (because for some reason you are stuck – which we will cover below) you can spend some of this Energy to Scavenge for Gold or for other items, such as Quartz, Wood, Jade and whatnot.

Depending on how many stages you have passed, if you head on to the “Scavenge” tab in the main interface you will see where you can go scavenge for goods. Do this if you want to quickly gather materials for upgrades!

Upgrade your cards, starting with your most used cards first!

Upgrading your cards will matter quite a lot, since you can basically make a ton of upgrades to make it more powerful. To upgrade a card, open the Cards menu (bottom of the screen), then tap on the card you want to upgrade and you will see on the right side the required materials needed for the upgrade.

If you have them, you can pay the Gold fee and make the upgrade! Else, you will have to farm those materials (by scavenging or from the Campaign mode, and also from chests). The cards can be anything between 1 and 4 stars, and the more stars it has, the better the card!

Also, if you don’t have a ton of good cards at the beginning (which you probably won’t), don’t worry – just upgrade your most used ones and in time you will manage to make all the upgrades!

What to do if you’re stuck on a level?

If you happen to be stuck on a level and you can’t pass it, it might be either because you are too weak, which will require you to make upgrades, or because you are using the wrong types of units and formation.

In the game you will have a “Quests” tab in the bottom side of the screen. I suggest that you check it often and try to complete as many quests as you can every day, because they have quite a big cooldown (a few hours).

They will reward you with various chests, and it’s definitely worth it especially if you are still at the early stages in the game. Later on, the more you level up, you will unlock even more chests, so the rewards will be plentiful!

These would be all of our Crazy Defense Heroes tips and tricks that we have for you right now! Do you know some more useful game tips that you would like to share with us? Make sure you leave them down in the comments section below so everyone can see them!