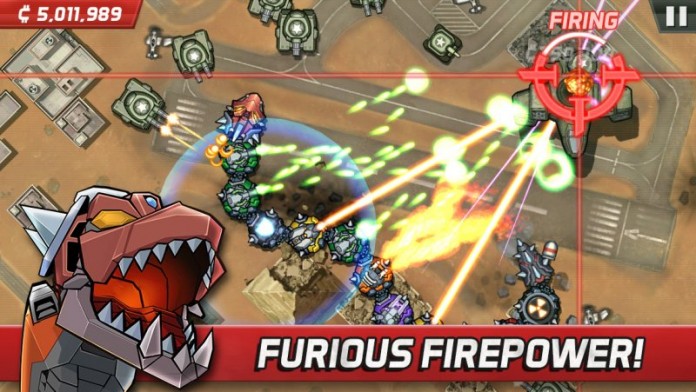 Colossatron is quite a unique game, sporting a peculiar setting. The game is also quite hard at times, something that might put some players off.

While this means that it’s not a game for everyone, it also means that it can be a rewarding experience for those gamers ready to invest some time into Halfbrick’s game.

Wheter you’re a newbie just getting started or an experienced player wanting to enjoy the game even more, this tips will definitely be helpful in your quest to create the most powerful beast of the world.

PowerCores are the glowing objects that appear at times during gameplay. Getting them as soon as you can should be your priority, since they will help you in your quest.

PowerCores can also be combined to obtain some advanced benefits. The basic ones only provide some basic improvements so you may want to use the advanced ones as soon as possible.

Combining PowerCores is easier than it looks. Combining Cores of the same color will reward you with some powerful weapons. Combining different colors will create completely different Cores, like the repair drone obtained by mixing red and blue cores.

To unlock more PowerCores in a permanent way, ensuring that they always appear during each stage, you will have to use 15 Prisms which can be found in the game or bought separately

The Special PowerCores are six in total. Cluster Bombs, Flame Thrower, Laser Beam, Plasma Cannon, Ice Cannon, Repair Drones. Using any of these cores will give you a distinct advantage during battle so make sure to use them as soon as possible.

In order to fully conquer a country, you will have to complete four stages. The first three are usually easier stages where you will have to complete a specific objective in order to win. The final stage of each country is the capital and these ones are usually quite challenging. The general will be throwing everything at you so be prepared. If you want to take the easy way out, there’s a simple but suicidal way to do it. Let your Colossatron lose all parts to make its head explode. You will be presented with the choice to begin the stage again or spend 2 Prism to rebuild it on the spot. Spend the Prism and the stage will be completed automatically.

If you want to learn more about the game, you can check out our in-depth review of the game by going here.