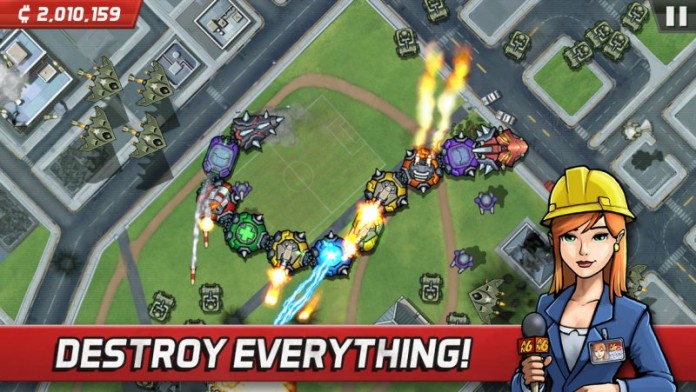 I know a few hardcore gamers who look down at people who enjoy games like FarmVille or Candy Crush Saga. I know I was one of them some time ago, when I used to think that anything that has “casual” in it is not a game worth playing. Your opinion – at least on the match three genre – might change, though, if you decide to give Colossatron: Massive World Threat a try on your iPhone or iPad. And I think you should.

Somewhere at its core, Colossatron is a match three genre. But nothing you know about the cutesy jewel matching style of gameplay to save the princess or the happy tree creatures can be found in Halfbrick’s insane game. Instead, you control a colossal alien creature bent on destructing earth with all means possible. And “all means possible” translates as weapons of mass destruction. Sounds great, right?

The truth is that indeed it’s all great about the game: you don’t control the snake-like creature itself while it moves through the cities, ravaging buildings and destroying the troops of General Mustache, your number one enemy, a man of few words and a big mustache. But back to your colossatron – as I was saying, you’re not controlling it’s movement, but its shape and constitution. 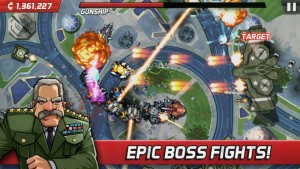 In other words, you pick up spheres that appear in the game screen every now and then and attach them to your snake. Each sphere represents a weapon, and combinations are possible and actually recommended in order to create more powerful weapons. Put a red near a blue and you get a purple weapon that’s better than the two combined. Put three reds in a row and you get a mega red weapon. Put three mega red weapons next to each other and you get an even better cannon. And so on – something that in theory is extremely easy.

In Colossatron, though, things get a little more complicated and therefore a lot more fun: first of all, the Colossatron itself is moving constantly, making it a bit more difficult to attach the pieces where you want to. There are also a ton of tanks and turrets and choppers and trucks trying to take your snake down, shooting at it from all directions and this makes things even more complicated because, first of all, it’s a little chaos there and second because these earthly troops destroy bits of your Colossatron, potentially putting an end to your well-though plan of having a super-mega-red weapon in the middle (weapon names vary, I’m just too lazy to memorize them).

And if this is not enough for you, Colossatron comes with even more goodies. Power-ups of all sorts can appear during the gameplay to help you destroy General Mustache’s troops, repairs and upgrades can be purchased during the missions and tons of cities and areas await to be destroyed. 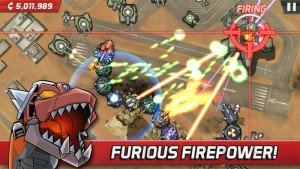 The entire game is presented in a brilliant matter – it all looks like a live news feed broadcasted by your national television, with commentary from the military and analysis on the go of your destruction. It’s also a smart way to announce the player on the upcoming threats and it simply skyrockets the atmosphere. It’s really one of the best presentations ever!

Of course, it’s not all laser and napalm in Colossatron: Massive World Threat. During your first few minutes in the game you will be very confused, not knowing exactly what to do and what pieces to match with what pieces in order to get something spectacular. The chaos will be of so huge proportions in the later stages of the game that you will simply find it impossible to focus (or maybe I’m just not made for such large scale destruction).

Overall, Colossatron is a game that proves to be insanely fun and is clearly the most hardcore match three title that you have ever played. A proof that originality can take even the most boring of genres and turn them in action packed bits of brilliance. A must play game!