Call of Duty: Mobile was globally released on October 1, 2019, meaning the game’s second anniversary is around the corner. In the previous year, COD Mobile developers kept introducing a plethora of thrilling content, including new game modes, multiplayer maps, events and a lot more. And this clearly states that it was a mind-blowing year for COD Mobile enthusiasts.

But now it’s time to wrap up things to welcome a whole new Call of Duty: Mobile era. To celebrate the second anniversary with a bang, players can indefinitely expect super exciting content in the forthcoming updates. Thus, this article gives you a glance at everything you need to know about COD Mobile’s second-anniversary celebrations.

When is Call of Duty: Mobile second anniversary?

As we’ve mentioned earlier, the COD Mobile was launched on October 1, 2019, meaning we can expect the second-anniversary celebration to commence by this time. However, the COD Mobile team has confirmed that it isn’t going to start at the end of the month. Therefore, players can also expect the Call of Duty: Mobile second anniversary to begin a bit earlier with the season 8 update on September 24.

Call of Duty Mobile’s 1st-anniversary update was loaded with a wide range of new features, content, and updates. And one can expect the same from the second-anniversary update too. Still, many players are curious about the new additions coming along with the next major patch.

Well, it’s better to start off with the anniversary banner itself. The COD Mobile Chinese version has unveiled the first-ever teaser for the second anniversary season. Although it doesn’t contain much intel, yet it’s enough to build up the hype. Here’s a look at it:

The PP19 Bizon – Anniversary Limited edition was showcased in a post by the Chinese version. According to a well-known data miner, this blueprint can be claimed for free during the anniversary period.

As always, the Call of Duty: Mobile 2nd anniversary update will also include a special event packed with an exclusive set of tasks, rewards, rules and more. So it is going to be another significant change that players should look for.

Last but not least, the logo for second-anniversary celebrations has also been data mined which states “Road 2 Anniversary”. Players are more likely to witness the same logo everywhere whenever Activision starts dropping 2nd-anniversary teasers officially.

So that’s everything you need to know about the COD Mobile 2nd anniversary celebrations. We’ll make sure to keep our readers updated with the new information as soon as it drops out.

COD Mobile Grasshopper BR Class: Everything you need to know

How to gift battle pass in COD Mobile 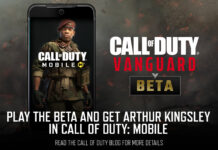 COD Mobile: How to get free Arthur Kingsley operator