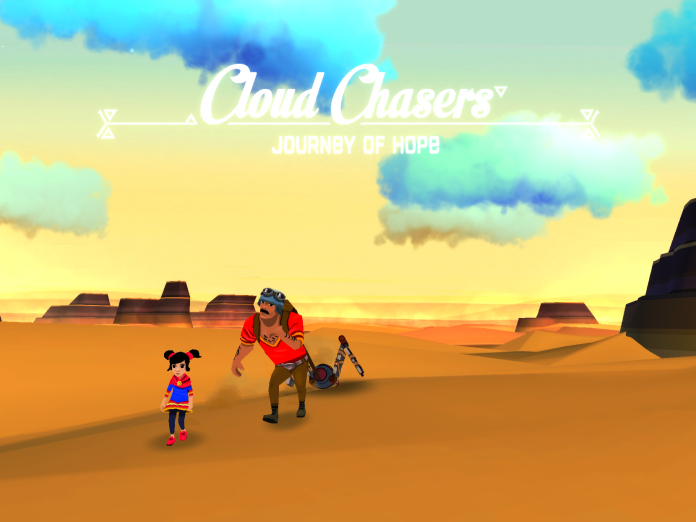 Roguelike games have managed to become quite popular on the App Store in recent times, thanks to a few titles coming with streamlined gameplay features which allow them to be enjoyed even by those who have never played similar games before. While some iOS roguelike games don’t differ too much from the classic roguelikes of the past, there are others which manage to set themselves apart with unique settings and features. Among the latter is Cloud Chasers, a new game developed by Blindflug Studios.

The setting is the first feature that sets Cloud Chasers apart from the other roguelike games available on the App Store. In the game players control Amelia, a young girl who has to traverse the deadly wasteland the world has become with the help of her father in order to reach one of the cloud cities where the elite of the world lives. This elite isn’t too happy about desert dwellers entering their lands and defend its gate with powerful machines. Amelia will have to pilot her glider and be as smart as possible to get past the machines and avoid ending up without water, which is fundamental for her and her father’s survival. Like in the previous game from the team, First Strike, Cloud Chasers deals with themes that are meant to make players think. This fact alone elevates Cloud Chasers considerably, as its setting and story have an emotional impact that very few other titles posses.

While the game’s premise is very interesting, Cloud Chaser’s gameplay isn’t as well developed. As mentioned above, players will be controlling the glider while searching for resources and water and avoid enemy attacks. Controlling the glider is satisfying enough but the whole experience tends to become too repetitive, with the game’s challenge level and the glider’s limited upgrade tree doing little to improve the situation, often forcing players to prefer the high water option at waypoints, a choice that will make them miss some of the game’s events. The strong narrative, likeable characters and short total length of the game make sure that players will stay hooked from beginning to end despite these shortcomings.

While the themes Cloud Chasers deals with are in no way light-hearted ones, the game ‘s graphics do an excellent job in creating a unique and charming atmosphere which contrast nicely with the game’s more serious themes. Amelia and Francisco’s journey is a difficult one, but the game’s unique locations manage to make their journey feel less bleak than what it may seem.

Everything considered, Cloud Chasers is a decent roguelike game with very strong narrative and likeable characters. The gameplay portions aren’t, unfortunately, as good as the story ones, with a high challenge level and lack of variety that often force players in taking the safest route possible, making them miss some story content in the process. Cloud Chasers isn’t a game that all roguelike fans will enjoy but its unique premise makes it an interesting titles for those who like good stories and likeable characters.