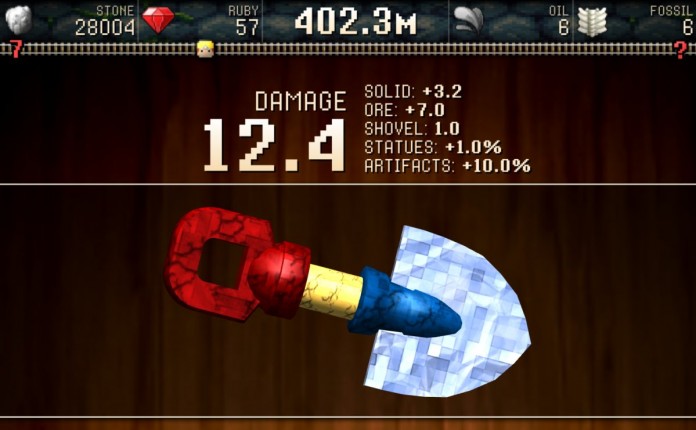 The creators of the amazingly popular CivCrafter have launched a brand new endless clicking game in the same universe which can even be connected to your CivCrafter account! And since I believe that you can’t wait to become the best player there is, we’re here with some CivMiner cheats and tips to help you get the most out of this game.

So if you need more stone or just generic gameplay strategies, read on for our CivMiner tips and tricks!

1. It’s all about the combos, eventually: at first, you can and will tap the screen randomly, not really paying attention to what’s happening there. But pretty soon, the blocks that you will encounter will become more and more difficult to break, so you should really pay attention to combos: tap and break the same type of block in order to get the combos running. Don’t forget to actually check out the sides since there will be blocks there too (which you can skip if you want to) to get the maximum combos.

2. The only goal is to go down: go as deep as possible, so unless you really want to gather as many rocks as possible, you should only focus on digging in the middle of the screen – this way, you will go deeper faster.

3. Join a good, active clan as soon as possible: the more active your clan is and the more artifacts and more oil they mine, the better will be for you: in terms of boosts to the damage of your shovel, and also in terms of potential Ruby gains as the top clans will receive a ton of rubies as a reward.

4. If you are also playing CivCrafter, don’t hesitate to link your games: you can win gold for CivCrafter while digging in CivMiner!

5. It’s not all about the boosts: indeed, they are useful and later on, when the blocks are harder and harder to destroy, they will come in handy, but don’t pile up on them and use them as soon as you get them to get the immediate advantage. Just keep an eye on the meter on the top of the screen and don’t use them when you’re really close to the question mark (which is a boss battle).

6. Lose some boss battles: they do get more and more difficult the deeper you get, but I still recommending you to intentionally loose one in every three battles (or maybe one in two). Why? Because I always get the impression that the game throws at me more ruby blocks after I lose a battle, and free rubies are always welcome. This might get fixed in a future update, so make sure you take advantage of this while it lasts!

7. Don’t invest too many rubies in Sculptors: I really believe that 5-10 are enough, because eventually they will catch up on you and you won’t have enough stone for them to keep building sculptures. Let them work slowly but surely and eventually you will get that ton of Statues (and therefore boosts to your pick) that you need.

Don’t forget that you can actually get to name a stone if you’re the first to find it (which is really difficult, though, since it’s basically those who dug the most who find the new stones), but you can always hope for a miracle. And if you have other CivMiner tips and tricks, don’t hesitate to let us know in the comment section below!